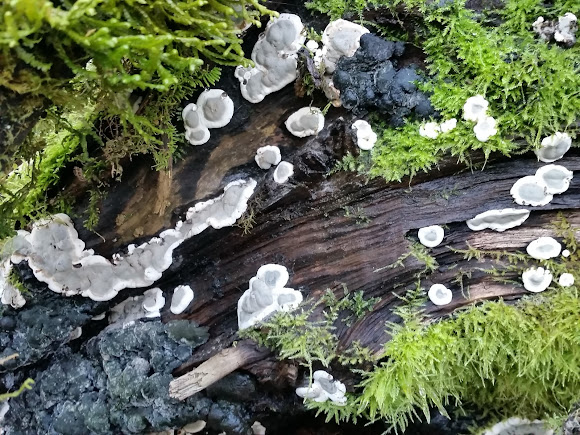 Kretzschmaria deusta, commonly known as brittle cinder, is a fungus and plant pathogen found in temperate regions of the Northern Hemisphere. It is common on a wide range of broadleaved trees including beech (Fagus), oak (Quercus), lime (Tilia), and maple (Acer). It causes a soft rot, breaking down both cellulose and lignin, and decays the trunk and/or roots of living trees. The fungus continues to decay wood after the host tree has died, making K. deusta a facultative parasite.[1] The resulting brittle fracture has a ceramic-like fracture surface. Black zone lines can be seen in cross-sections of wood infected with K. deusta. New fruiting bodies are formed in the spring and are flat and gray with white edges. The fruiting bodies persist all year and their appearance changes to resemble asphalt, consisting of black, domed, lumpy crusts. The mature fruiting bodies are brittle like charcoal and are usually found between the root buttresses.

Found on a rotting log in a thick wooded forest.