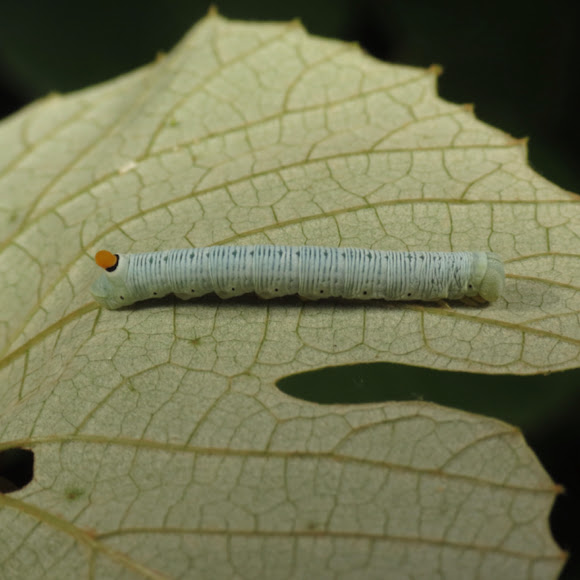 You can not confuse this sphinx with any others around the area. They are simply that unique. The adults are brown black with high in color yellow hindwings. The only way to tell the difference between sexes is by the male having a trident tufted abdomen whereas the female has a single anal tuft. The adults are a medium sized sphinx frequently visiting lights and bait traps, along with roadside puddles and sap flows. Both the caterpillar and adult moths of this species are very cryptic. Adults mimic bark on trees by posing their abdomen up and fanning out their wings molding them to the tree branches so they look like they are part of the branch. The caterpillars at early instars are pale greenish white with a long slender caudal horn which is transformed into a black and orange recessed horn in later instars. The orange hump becomes a fake eye in the late instars and if disturbed the caterpillar will squeak and turn around to bite it's attacker. There are two different color forms. The first one is an array of browns, grays, an whites in lines down the body. This form tends to blend in with the Grapevine bark so it hides against the bark during the day. The second form is the same pattern as the background but dorsum and lateral sides are covered with green patches. The green represents unripe grapes so the caterpillar tends to rest near the stems of the vine during the day to blend in and mimic a cluster of grapes. The main food plants are Grape species, Ampelopsis, and Virginia creeper. Pupation occurs in a shallow subterranean chamber and the pupae overwinter and hatch in late spring early summer.

I found one of the caterpillars on my grapevine in my yard when I was looking for larvae of the Darapsa genus in which I find every year. But I was lucky enough to find an Abbott's sphinx larvae 1st instar underneath one of the bigger leaves. The second one I found on an excursion with Dr. Wagner and some grad students when we were black lighting and I was flipping over wild grapevine leaves.