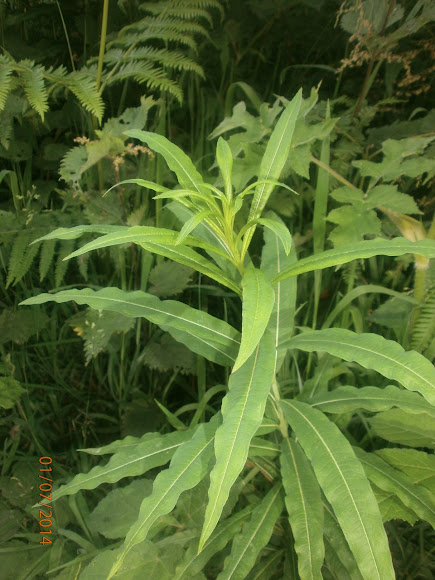 a non-native, invasive weed that has culinary uses. The pith of the plant can be scraped out to thicken soups and stews and also adds carbohydrates. Young shoots and leaves can be eaten raw. Older ones are more bitter. (I tried the new leaves of a belly-button high plant and they were very bitter). The pith is best harvested when the plant is flowering but not too old as the stem becomes drier and woodier and the pith harder to access. Here's a good link on preparing the pith for immediate consumption or for a soup: http://paulkirtley.co.uk/2013/rosebay-wi... I picked 12, 50cm lengths and used the technique as per the link to gather the pith seen in the third photo. I used a flat ended stick as the tool to scrape out the pith and washed the pith off the stick directly into the water to speed the process up. I think this much could be gathered in about 30 minutes. Perhaps half that time if I were to use the bottom part of the plant rather than the top part since there's probably more pith down there. Currently eating a horrendous looking soup made with hogwort, nettles, dried chanterelles and velvet shank, and some fresh chanterelles and what I think is a single small larch bolete. I used rosebay willowherb pith to thicken the soup and seasoning with an oxo cube. There is an odd sensation on my tongue as with a faded nettle sting... I don't know whether this is from the nettles or the hogweed. I bet this is hilarious to anyone who's reading hahaha!