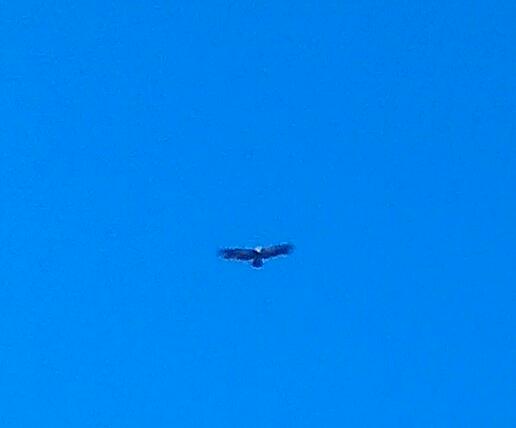 The Griffon Vulture is 93–122 cm (37–48 in) long with a 2.3–2.8 m (7.5–9.2 ft) wingspan. In the nominate race the males weigh 6.2 to 10.5 kg (14 to 23 lb) and females typically weigh 6.5 to 11.3 kg (14 to 25 lb), while in the Indian subspecies (G. f. fulvescens) the vultures average 7.1 kg (16 lb). Extreme adult weights have been reported from 4.5 to 15 kg (9.9 to 33 lb), the latter likely a weight attained in captivity. Hatched naked, it is a typical Old World vulture in appearance, with a very white head, very broad wings and short tail feathers. It has a white neck ruff and yellow bill. The buff body and wing coverts contrast with the dark flight feathers. Like other vultures, it is a scavenger, feeding mostly from carcasses of dead animals which it finds by soaring over open areas, often moving in flocks. It establishes nesting colonies in cliffs that are undisturbed by humans while coverage of open areas and availability of dead animals within dozens of kilometers of these cliffs is high. It grunts and hisses at roosts or when feeding on carrion.

It breeds on crags in mountains in southern Europe, north Africa, and Asia, laying one egg. Griffon Vultures may form loose colonies. The population is mostly resident. Juveniles and immature individuals may migrate far or embark on long-distance movements. In Croatia, a colony of Griffon Vultures can be found near the town of Beli on the island of Cres.[9] There they breed at lower elevations, with some nests just 10 m above sea level. Therefore, contact with people is common. The population makes frequent incursions in the Slovenian territory, especially in the mountain Stol above Kobarid.

it is a photo taken from moving car, with HTC One mobile phone, so its kind of blurry, but its taken at Cres, one of remaining nesting grounds of species in Europe