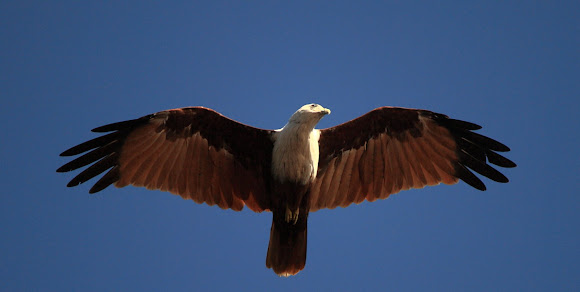 The Brahminy Kite (Haliastur indus) also known as the Red-backed Sea-eagle in Australia, is a medium-sized bird of prey in the family Accipitridae, which also includes many other diurnal raptors such as eagles, buzzards and harriers. They are found in the Indian subcontinent, Southeast Asia and Australia. They are found mainly on the coast and in inland wetlands where they feed on dead fish and other prey. Adults have a reddish brown plumage and a contrasting white head and breast which makes them easy to distinguish from other birds of prey. ( from: Wikipedia)

The nests are constructed of small branches and sticks with a bowl inside and lined with leaves, and are sited in various trees, often mangroves. They show considerable site fidelity nesting in the same area year after year. In some rare instances they have been seen to nest on the ground under trees. ( from: Wikipedia)