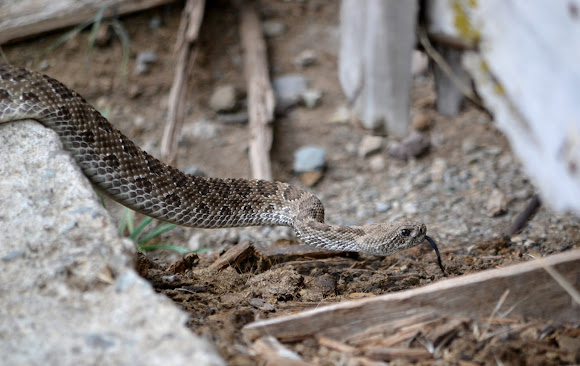 Estimated 3 ft to 3.5 ft in length. Vivid coloration, fresh, glistening scales. May have molted soon before the photo was taken. The large lump in his/her middle suggests that we interrupted the digestion of a serious meal! *NOTE* The Prairie Rattlesnake (also called the Western Rattlesnake) is highly venomous to humans and should be treated with respect and caution.

Found slithering quietly around the ruin of an old 1800's hotel by the railroad tracks near Lewis and Clark Caverns State Park (just outside of Three Forks, Montana). Climate: Semi-arid prairie land. *Exact latitude/longitude location has been plotted on the map.

My fiancé, James, and I happened upon this shy little rattler during our trip to Montana late July of this year (2013). James went right by the rattler as he went to sneak around the old building and get photos. I'm always looking for animals of any kind, though, so I spotted him immediately, and it's a good thing too! James would've stepped right on him/her on his way back. Giddy at the spotting, I spent long minutes trying to get just close enough to safely snap detailed photos with my distance lens. A beauty, this one. I wish I could identify its biological sex.

Beautiful snake! Your time paid off, the shots came out great :) You can add this to the Snakes of the US Mission, http://www.projectnoah.org/missions/1202... Hope you get to see more snakes!