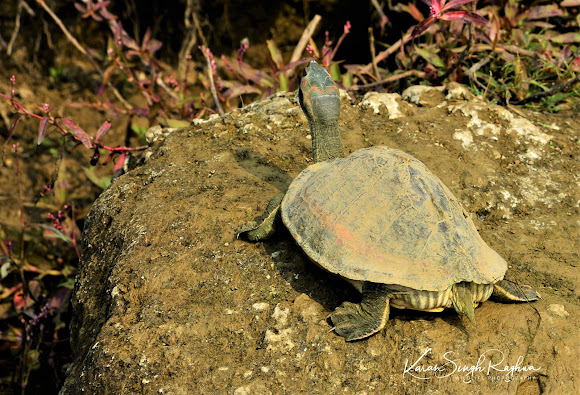 These unique, crawling reptiles are aptly named after the tent-like appearance of their high vaulted shells that feature hump-like’ projections on the keel. They have one or two brownish to red dots behind their eyes; a significant marker, which differentiates them from Indian roofed turtles that have a crescent-shaped red mark behind the eyes. These turtles are small sized; the males averages 3.5” – 5”, while the females are slightly bigger ranging between 5’- 9”. The male Indian tent turtles are brightly colored compared to the females and have longer and thicker tails. They also have some pink markings on the prominent projections on the keel. Information taken from: https://www.allturtles.com/indian-tent-t... Photo taken at Chambal Wildlife Sanctuary, U.P. India

The preferred habitats of P. tentoria are freshwater rivers and swamps In line with their name, they are primarily found in Central and Northern India, Western Bangladesh, and Southern Nepal. They show a preference for large rivers such as Mahanadi, Godavari, Krishna rivers and their tributaries. They are diurnal aquatic turtles spend a great deal of time basking on the river banks, logs and rocks during the day. Indian tent turtles are mainly omnivorous and consume a wide variety of aquatic plants and animals in the wild

1. The species is endemic to India and Bangladesh. 2. Indian tent turtle breeding: These intelligent, beautiful colored turtles have a mating ritual in which the males seek consent from the females. The male turtles swim in circles around the females fanning their front claws until the courtship takes place. The breeding period starts in October and lasts approximately six months to the end of March. 3. Due to the pink band on the seams of their carapace, they are also known as Indian pinked ring tent turtle 4. These small, palm-sized, intelligent aquatic turtles make great pets once they become attached to their owners. They are playful, colorful and do get attached to their owners. In return, they require a pond with a lot of water that is predator proofed – cats, dogs, and even kites are quite fond of turtles and must have a basking platform.