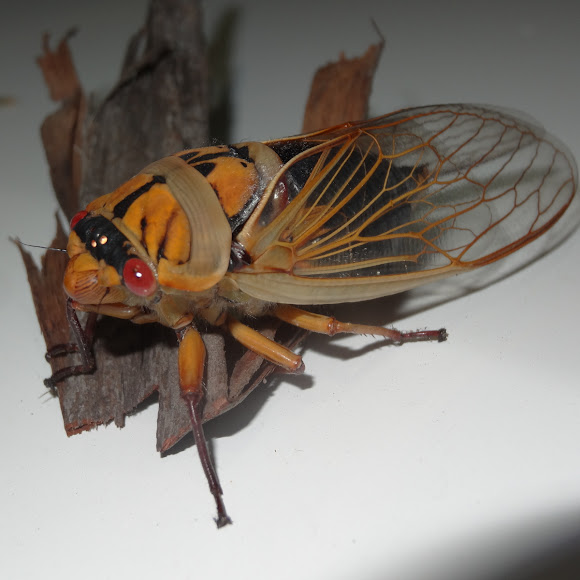 My favourite of the insect world. This huge cicada comes in at least four different colour forms. Each has it's own common name originally given by Australian children. There is an all-green one - Green Grocer, green with blue wings - Blue Moon, a brown one - Chocolate Soldier, a red one and this one apparently also occurs without the black mask and is called Yellow Monday. All are identifiable by the three ocelli between reddish eyes on a very wide head. Approximately 90mm long.

Attracted to strong night lighting on a very warm evening at a local used car yard this one was at first clinging to a car tyre. The area is surrounded by fairly dense, dry eucalyptus based forests.

For those curious about the cicada names... http://www.cicadamania.com/cicadas/austr... At the same time we also found a green and turquoise version (Blue Moon) spotted here .... http://www.projectnoah.org/spottings/435... THIS species lives a seven year cycle. The adults live for about six weeks (unless a predator intervenes which is often the case). The males produce a very loud chorus of phasing, synchronised sound when the temperature is perfect (above 18.5C) which is very much regarded as the sound of summer in south-eastern Australia. Here are some interesting comments from Dr Max Moulds from the Australian Museum in Sydney.... . . "When people come here from Europe and America they are amazed, they have never heard anything like it before," Dr Moulds said. "Because the green grocer has adapted to cities like Sydney and Melbourne, and because they are so loud and obvious, cicada song gives our cities a summertime buzz distinct from most other cities around the world." Another little-known fact is that cicadas suffer from insect VD. Dr Moulds said the adults of some cicada species are susceptible to fungi of the genus Massospora. "These entomopathogenic fungi attack the terminal portion of their abdominal cavity and genitalia - a cicada venereal disease if you like," Dr Moulds said. "It is a fungus unique to cicadas and it usually makes their tail ends drop off." http://australianmuseum.net.au/Greengroc... http://www.abc.net.au/science/articles/2... A red form seen here http://www1.dpi.nsw.gov.au/keys/cicada/c...

Thanks Rob. This one is a reminder that summer is truly finished here.

Thanks for that Martin. Fixed. I'm looking forward to seeing yours. I'm also getting a little obsessed with finding a red one.

I'm afraid your description is not as simple as you suggest..... there is another form. Yellow Monday is entirely yellow (monochromatic). Your pic is wearing a black mask and body and it is the Masked Devil ( same species). Last night I saw the Masked Devil emerging, both the pale green and also orange/yellow colors. I shall post them tonight.

Thanks Leanne. Have you got cicadas there now with the dry? Ours are getting deafening.

thanks dotun55 - they're actually quite big

Thanks Stephen and Mac. I know you guys have suffered heat and dry but for us this one means summer is really coming... :-)

Reiko, Jopy, Jemma, Luis, guanalan2013, Carol, Maria, Adarsha - the cicada thanks you all for the compliments.

that is so cool.
I congrats you!!

There are even songs about Cicada..! Omg!