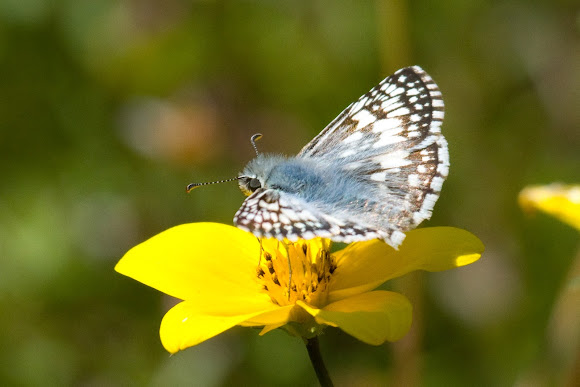 The Common Checkered-skipper (Pyrgus communis) is a species of butterfly in the Hesperiidae family. It is known as the frequently seen Pyrginae species in the northern United States by collectors and watchers alike. The common checkered-skipper has a wingspan of 19 to 32 mm. It gets its name from the checkerboard pattern on its wings; the male tends to have broader bands than the female. The body tends to be blue-gray with the small amount of "fuzz" which is seen in all skippers. This butterfly flies in gardens, parks, fields, roadsides, riverbanks, lowlands and foothills throughout southern Canada and almost the entire expanse of the United States. It has also been seen in Mexico. The caterpillar has a black head and greenish-tan body. It has a dark line along its back and tends to be paler on the sides. In southern regions this species will fly all year with multiple broods. In the north it will have two broods and fly late into the fall.