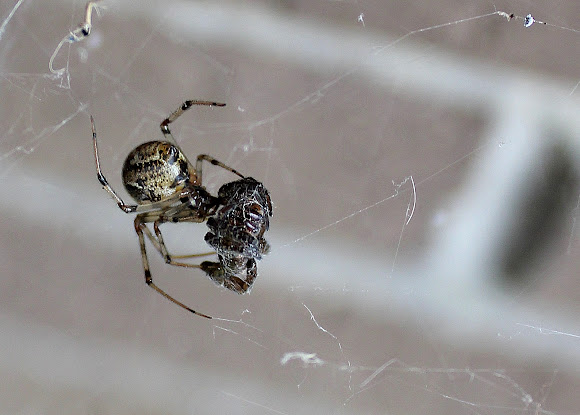 The very small, very fierce American house spider. What she's wrapping up is another spider ... a little wolf spider, I think. The focus on the last three photos is soft, but they show her even smaller mate looking on across the web.

Here's what happened to this spider. She had a hard time. She kept catching things that were too heavy, other spiders and beetles, and they often broke through the web and fell to the ground below. But, she also caught some other things she could eat. I passed by the web every day and checked on her, having met the species earlier in the year. Tough little creatures.

Anyway, she had built her web in an unfortunate location. In the fourth photo of this spotting, you can see a black structure to the left ... it's a standing ashtray. Still, nobody disturbed the web for a long time. I never did decide whether the folks who emptied the ashtray took special care not to mess her up, or whether it was just luck. Time passed and she made two egg sacs.

Then, one afternoon the ashtray had been moved. The web was destroyed, hanging in sticky broken strands on the brick wall, with the two egg sacs still attached and the spider alive. I thought, what a terrible image to take home tonight, this tiny spider and her egg sacs hopelessly stranded against the wall. I went back to my desk and, you know, typed on my keyboard.

Then I got a piece of paper and went back out there. Looked at the options. There was a corner nearby with a sill a couple of inches off the ground, part of a glass door frame. So, I held the paper under the broken web on the wall and pulled it, and the egg sacs, off the wall ... with the spider, too. Somewhere in the three steps to the wall, I lost the spider. I put the web pieces and the egg sacs on the sill in the corner and looked around to see if I could find the little spider. Just then she climbed up over the sill, found her eggs, started checking them out. OK, I thought, I've done what could be done.

I went back to my desk for a little while. Left about 20 minutes later, walking by the sill on my way out. In that short time, she had attached some of the broken web pieces to the walls of her new corner and hauled her egg sacs up into the web about an inch. Clever girl, I thought, and it kind of transformed my day. A spider's life is a small life, but I had been watching her for weeks, pulling for her ... and had hated seeing her hanging off the wall, all hope dashed. Now she had a fighting chance. And I helped her, I felt pretty OK about that, too.

By the next morning, she had spun a new web, discarding the patch job made of the broken web pieces. And she had hauled her egg sacs about six inches up into the web. Well, OK. After awhile, the egg sacs started showing signs of life, bulging here and there. But then it got cold and stayed cold for a week or so, and I thought, they'll never hatch ... maybe she waited too late in the year to raise spiderlings, maybe she didn't catch enough prey to grow strong enough to do it earlier. I didn't know.

A few days of unseasonably warm weather came and one of the egg sacs hatched, spiderlings emerging like a cloud from one end. But that's as far as they got. Don't know why they didn't survive, but they didn't, turning still, then brown, just above their empty egg sac, like a hanging sculpture. The second egg sac never hatched and one day the spider disappeared, too. Not too long after that, someone swept out that corner and everything was gone.

This is the kind of happy, kind of sad, story of suzmonk and the spider.

Question: I see people have re-visited this old spotting. Thanks! I've thought about this one. I think what I originally interpreted as the spiderlings dying might, in fact, have been the discarded skins of the second instar. I've read that the second instar happens about 30 hours after eclosion. Usually, these spiderlings are dispersed by ballooning, but this web was in a corner sheltered from the wind. Under those conditions, you might actually see the discarded skins hanging in the web. But, I'm no spider expert. I'm just a naturalist who read up on a topic. Can anybody out there speak to the question?

Thank you Suzmonk...if only the spider could speak. ..

Love this spotting and its fabulously documented story.

It's nice when you have an opportunity to observe a single creature over time. And it seemed kind of silly, maybe, to help this American house spider out with her catastrophe. But you know what, it made my week ... I felt really good about helping her, even though it didn't work out in the end. I love your comment about following up on your spottings ... you go, Gilma!

Lovely story suzmonk.
I also get very involve with my spotting, following them for weeks (when possible) It is so gratifying and I have learnt so much about all kind of creatures.

I forgot to say, Sckel, your story about the wasps was also very interesting. It's nice when we have a chance to get involved in these small lives ... watch how they live over time.

This is a great series and I really enjoyed reading your story about the spider and how you watched and looked after her!

Yeah, that makes sense. This is so good. I'll edit some my espottings. Thank you, suz.

I liked your story. I have wasps living in my house, they made ​​their nest in the entrance of the room. I thought of several ways to cut them out without damaging the eggs. I thought I could boot the nest and fixed it somewhere else. Finally, I decide that they will stay there until all the babies are born. Yesterday I saw one of the adult wasps put food in the mouth of the larvae. It is a unique experience for me. No matter if it's a common bug or ugly, are all incredible in their own way, and function in the biomes. :)

Suz, how do you make space in the text?

I checked this web the next day ... she lost her prize, the spider she's wrapping up in this photo was too heavy for her web and dropped to the cement below. But she'll catch something else.