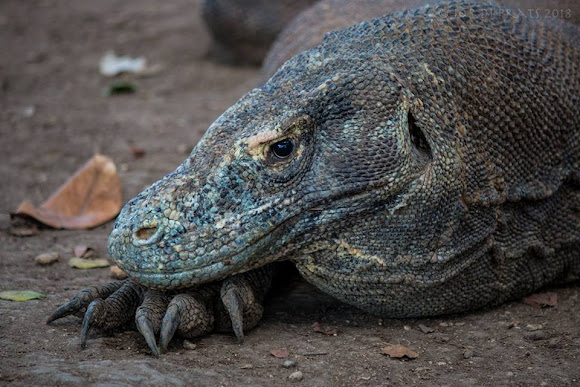 Large about 2,5 mt. tail as long as its body, weighing up to approximately 70 kilograms, forked tongue, skin reinforced by armoured scales. The Komodo Dragon is the largest living species of lizard.

This speciment has been spotted at Loh Buaya Komodo National Park - Rinca Island, Indonesia during a day walk with the park Rangers, it was moving in parallel to the path close to the Rangers Base. Varanus komodoensis Is also found in Komodo, Flores, Gili Motang, and Padar islands.

Thanks Christine and Dr Namgya

Congrats JordiPrats for the SOTD!

Thanks so much Daniele and Rangers

Congratulations Jordi, your Komodo dragon is our Spotting of the Day:

"That's one formidable reptile to be reckoned with! This Komodo dragon (Varanus komodoensis) is our Spotting of the Day. A powerful and dominant predator found on just a few Indonesian islands, the Komodo dragon is the largest, heaviest lizard in the world. Its diet includes carrion, deer, boar, smaller dragons and water buffaloes. It is known to occasionally attack humans. Recent studies have shown that The Komodo dragon possesses venom glands and has venom-like toxins in its mouth. Listed as Vulnerable on the IUCN Red List.
To learn more about the Komodo dragon: https://buff.ly/2JP4LZm "