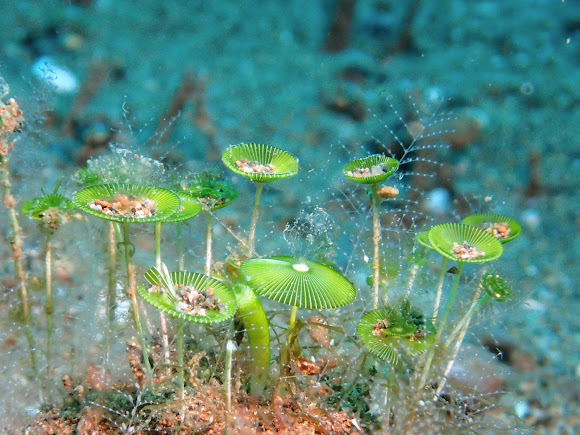 This Acetabularia major algae looks like underwater fungi, the stalk is around 3-4 cm and the green cap is around 1 cm in diameter. Generally, the Acetabularia algae are fondly referred to as Mermaid's Wine Glass. Despite their look, they are a Single-Cell Organism. It comprised of three anatomical parts: a bottom rhizoid that resembles a set of short roots; a long stalk in the middle; and a top umbrella of branches that may fuse into a cap. The single nucleus of Acetabularia is located in the rhizoid, and allows the cell to regenerate completely if its cap is removed. The caps of two Acetabularia may also be exchanged, even from two different species. In addition, if a piece of the stem is removed, with no access to the nucleus in the rhizoid, this isolated stem piece will also grow a new cap.

They are usually found in shallow sandy bottom.