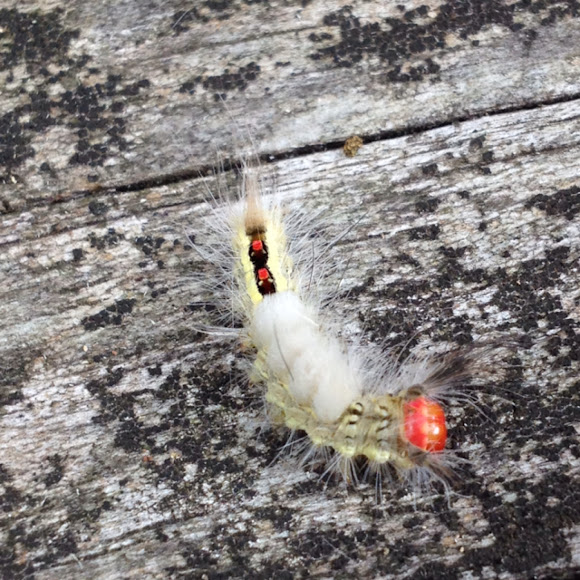 Orgyia leucostigma, the White-marked tussock moth, is a moth in the family Lymantriidae. The caterpillar is very common especially in late summer in eastern North America, extending as far west as Texas, Colorado, and Alberta. Also found in Southern England Europe. Eggs Eggs are laid in a single mass over the cocoon of the female, and covered in a froth (Wagner 2005). Up to 300 eggs are laid at a time. Larvae The larvae are brightly coloured, with tufts of hair-like setae. The head is bright red, the body has yellow or white stripes, with a black stripe along the middle of the back. There are bright red defensive glands on the hind end of the back. Four white toothbrush-like tufts stand out from the back, and there is a grey-brown hair pencil at the hind end. Touching the hairs will set off an allergic reaction in many humans (Wagner 2005). Young larvae skeletonize the surface of the leaf, while older larvae eat everything except the larger veins (Rose and Lindquist, 1982). They grow to about 35 mm. Pupae The caterpillars spin a grayish cocoon in bark crevices and incorporate setae in it (Rose and Lindquist, 1982). The moths emerge after 2 weeks.

Found in my yard.