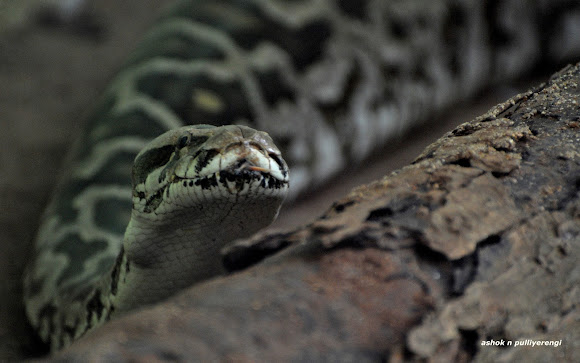 Indian Rock Python is nocturnal species; actives at night but can be spotted at daytime during basking and hunting. Remains hidden in dense bushes, vegetation, trees, caves during day time. Habitat of this species is wide which includes grasslands, wetland, rainforest, hills, dense and open forest, mangroves, agricultural lands etc. Prefer water body near the activity range. It is generally a silent and secretive species and likes to keep distance from human beings. On disturbance first try to escape but on catching attempt make a coil of body and produce whistle like sound to alarm its enemy. Gives bite on getting threat on the range of attack. Pythons can hibernate during winter from December to February in groups. Diet: Feeds on rodents, mammals, birds, monitors and other lizards, etc. Famous for its deadly suffocative constriction power.