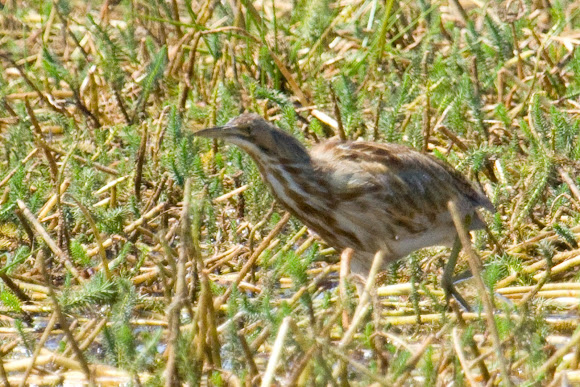 It is a large, chunky, brown bird, very similar to the Eurasian Great Bittern (Botaurus stellaris), though slightly smaller. It is 58–85 cm (23–33 in) in length, with a 92–115 cm (36–45 in) wingspan and a body mass of 370–1,072 g (0.82–2.363 lb). Although common in much of its range, the American Bittern is usually well-hidden in bogs, marshes and wet meadows. Usually solitary, it walks stealthily among cattails or bulrushes. If it senses that it has been seen, the American Bittern becomes motionless, with its bill pointed upward, causing it to blend into the reeds. It is most active at dusk. More often heard than seen, this bittern has a call that resembles a congested pump. Like other members of the heron family, the American Bittern feeds in marshes and shallow ponds, dining on amphibians, fish, insects and reptiles.