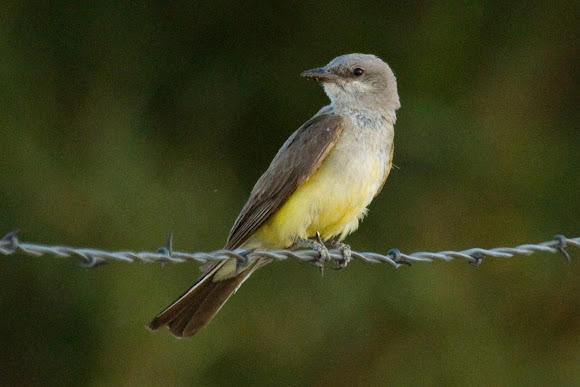 The Western Kingbird (Tyrannus verticalis) is a large tyrant flycatcher. Adults are grey-olive on the upperparts with a grey head and a dark line through the eyes; the underparts are light becoming light orange-yellow on the lower breast and belly. They have a long black tail with white outer feathers. Western kingbirds also have a reddish crown that they only display during courtship and confrontations with other species. Their breeding habitat is open areas in western North America. They make a sturdy cup nest in a tree or shrub, sometimes on top of a pole or other man-made structure. The name kingbird is derived from their "take-charge" behaviour. These birds aggressively defend their territory, even against much larger birds such as hawks. These birds migrate in flocks to Florida and the Pacific coast of southern Mexico and Central America. They wait on an open perch and fly out to catch insects in flight, sometimes hovering and then dropping to catch food on the ground. They also eat berries. The song is a squeaky chatter, sometimes compared to a dog's squeaky toy. The call is a sharp loud whit. Occasionally sings before sunrise.

caught and ate a large dragonfly while I was watching it