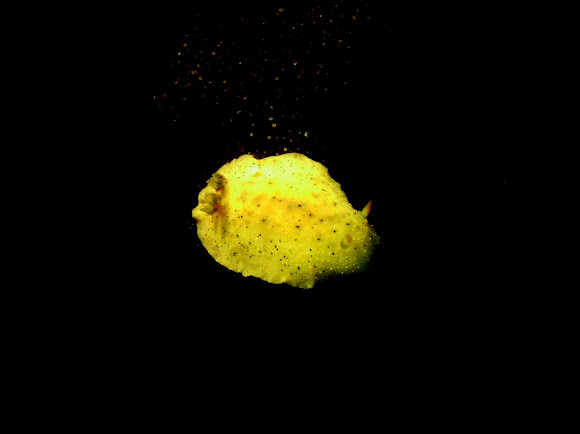 One of the largest sea slugs, or more properly nudibranch (meaning “naked gills”). There are several other similar yellow to orange species which differ in size and body color pattern. While it’s average size is in the four inch range (as is this specimen) , it can grow to 6 inches. It is usually a bright yellow to orange in color with black spots both between as well as on the tubercles (small body projections). It has two upright structures (rhinophores) on the head (withdrawn on the left of this animal) used to detect water-born smells and a frilly ring of light yellow to orange respiratory gills at the rear which can also be withdrawn. The sea lemon feeds on several kinds of sponge. Strings of eggs are deposited in the spring. This species, along with some of its cousins, has an fruity odor which may be a defense mechanism.

The Sea Lemon can be found in the low intertidal and subtidal zones. The Sea Lemon ranges from Alaska to southern California.

This one is located in the Edmonds Underwater Park, Puget Sound, Washington State.

Thanks Marta, I added it. Maria, I have a few of them crawling but this one got knocked off its perch and I got a picture of it slowly dropping (you can see the air bubbles escaping from under it)

Nice one! Most photos show them crawling.

You can add this spotting to the mission for nudibranchs :-)
http://www.projectnoah.org/missions/7791...