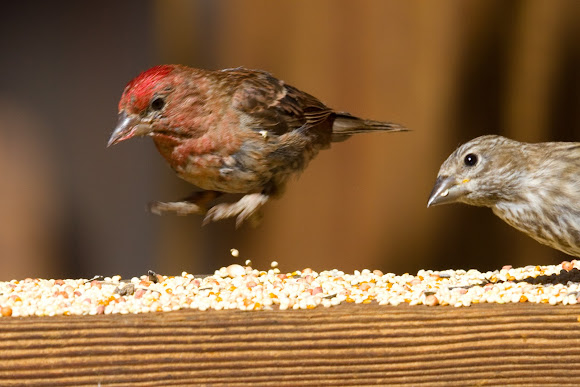 Cassin's Finch (Haemorhous cassinii) is a bird in the finch family Fringillidae. This species and the other "American rosefinches" are placed in the genus Haemorhous by the American Ornithologists' Union but have usually been included in Carpodacus. Adults have a short forked brown tail and brown wings. They have a longer bill than the Purple Finch. Adult males are raspberry red on the head, breast, back and rump; their back and undertail are streaked. Adult females have light brown upperparts and light underparts with brown streaks throughout; their facial markings are less distinct than those of the female Purple Finch. Their breeding habitat is coniferous forest in mountains of western North America as far south as northern New Mexico and Arizona; also Southern California near Baja California. They nest in large conifers. They move to lower elevations in winter. Birds from Canada migrate south; other birds are permanent residents; non-breeding resident birds winter as far south as central interior Mexico, the Mexican Plateau. Besides the 'breeding-residency' locale of southwest Canada, two disjunct breeding areas occur: the coastal mountains of extreme northern California and the Black Hills of South Dakota. These birds forage in trees, sometimes in ground vegetation. They mainly eat seeds, buds and berries, some insects. When not nesting, they often feed in small flocks.

Nice shot of him jumping!