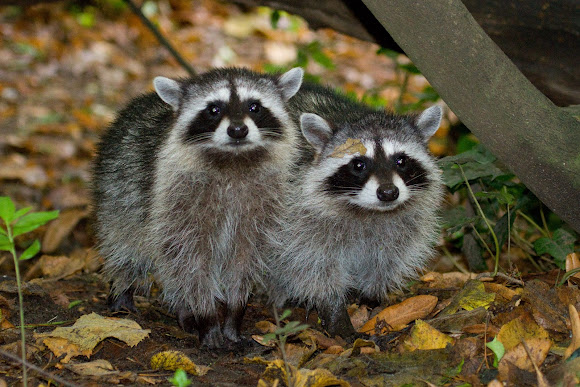 The raccoon (Listeni/ræˈkuːn/, Procyon lotor), sometimes spelled racoon, also known as the common raccoon, North American raccoon, northern raccoon[5] and colloquially as coon,[6] is a medium-sized mammal native to North America. The raccoon is the largest of the procyonid family, having a body length of 40 to 70 cm (16 to 28 in) and a body weight of 3.5 to 9 kg (8 to 20 lb). Its grayish coat mostly consists of dense underfur which insulates against cold weather. Two of the raccoon's most distinctive features are its extremely dexterous front paws and its facial mask, which are themes in the mythology of several Native American tribes. Raccoons are noted for their intelligence, with studies showing that they are able to remember the solution to tasks for up to three years. The diet of the omnivorous raccoon, which is usually nocturnal, consists of about 40% invertebrates, 33% plant foods, and 27% vertebrates.

Ava, I really like the leaf, too. It adds to the charm and innocence of this youngster. I have to admit I am not a fan of the adult raccoons.

Sweet series. I like the leaf accessory over the eye!