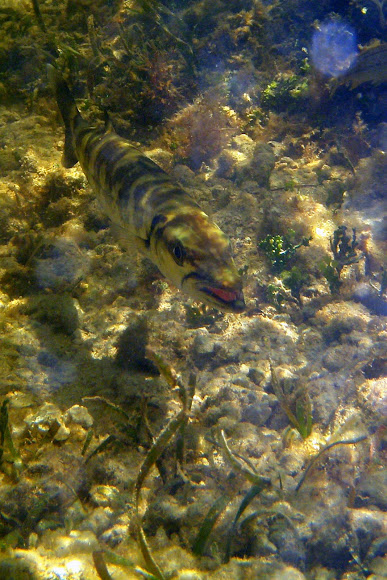 The barracuda is a ray-finned fish known for its large size and fearsome appearance. Its body is long, fairly compressed, and covered with small, smooth scales. Some species can reach up to 2.1 m (6.9 ft) in length and 30 cm (12 in) in width. The barracuda is a saltwater fish of the genus Sphyraena, the only genus in the family Sphyraenidae, and is found in tropical and subtropical oceans worldwide. Barracudas are elongated fish, pike-like in appearance, with prominent, sharp-edged, fang-like teeth, much like piranhas, all of different sizes, set in sockets of their large jaws. They have large, pointed heads with an underbite in many species. Their gill covers have no spines and are covered with small scales. Their two dorsal fins are widely separated, with the anterior fin having five spines, and the posterior fin having one spine and 9 soft rays. The posterior dorsal fin is similar in size to the anal fin and is situated above it. The lateral line is prominent and extends straight from head to tail. The spinous dorsal fin is placed above the pelvic fins and is normally retracted in a groove. The caudal fin is moderately forked with its posterior edged double-curved and is set at the end of a stout peduncle. The pectoral fins are placed low on the sides. Its swim bladder is large. In most cases, a barracuda is dark blue, dark green, or gray on its upper body, with silvery sides and a chalky-white belly. Coloration varies somewhat between species. For some species, irregular black spots or a row of darker cross-bars occur on each side. Their fins may be yellowish or dusky. Barracudas live primarily in oceans, but certain species, such as the great barracuda, live in brackish water. Credit: Wikipedia

ismael1
Thank you for commenting. Glad you liked the shot. You might be wondering if I enhanced the barracuda's mouth color - I did not.