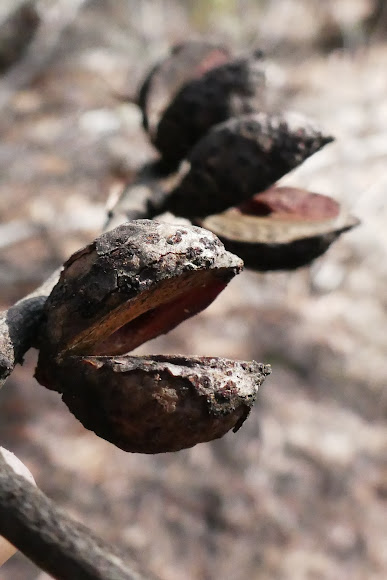 Laughing seed pods sharing a joke :-) Hakea is a genus of about 150 species of plants in the family Proteaceae, all of which are endemic to Australia. There are five species of Hakea known to occur in Girraween. http://www.rymich.com/girraween/index.ph... Possibly a species known as "tree hakea" (Hakea eriantha). It's the perfect height, although the seed pods don't seem to match exactly. Another is "finger hakea" (hakea laevipes ssp. graniticola), but its leaves are noticeably ribbed whereas this spotting is not (4th photo). A third is Hakea florulenta. The leaves of this species are not as prominently veined and are sometimes known to have pointed tips, although are more likely to have rounded ones; my spotting has pointed tips. However, this species is unlikely to exceed a height of 2 metres, and my spotting does. None of these species seem to be an exact fit, so the only way for me to make a positive ID is to take a much closer look and hopefully see the plants in flower. PS: A fourth possibility, in this case another subspecies of H. laevipes, is known to occur on the granite belt, although has not been documented in Girraween - H. l. ssp. laevipes. I will investigate this also.

An excellent reference site - http://www.flora.sa.gov.au/lucid_keys/Ha... I find it surprising how similar to the various Grevillea species that Hakea actually is, but the later is often referred to as the "poor relation". Unlike the Grevillea, however, there has been very little work done in developing new cultivars of Hakea, so... poor relation? There's nothing poor about being totally authentic and 100% pure! Like other well-known Australian Proteaceae natives such as Banksia, Grevillea, Persoonia, etc., Hakea is also a beautiful and uniquely Australian genus that has its own character and has earned its place in the Australian bush.

"I've just upgraded to 60 grit on a belt sander for my feet." No wonder those plants are laughing...

That is INCREDIBLE, Mark!!!
I read that farmers have a time with them eating their food-crops, and are killing the birds to save their fields!!
This just AMAZES me!!

Hey Sarah.. Crackle is the sound they make as they turn a wooden house into mulch.
We had six pet sulphur crested cockies released in our valley in 1969 and now there are estimated 8000. Impressive as they aren't endemic in these parts.

A group of cockatoos is called a "crackle" (I didn't even know that) and a "family". They should call it a RIOT!

Thanks, Sarah. Cockatoos are pretty awesome, but so loud and naughty when they get together. All parrots are, but cockies doubly so. I've seen big flocks of hundreds of birds, but I've never seen a plague.

These seed pods are AWESOME!!
Happy we don't have "cockie plagues" in Ohio....😂

We are totally gross, Lauren, but I reckon Mark is worse. Cockie is a cockatoo.

You guys are kind of gross, what is a cockie?

I haven't graduated from nails clippers for my toe nails yet ;-P

Soft !? I've just upgraded to 60 grit on a belt sander for my feet.

Age makes us soft, Mark. Remember the tough feet as kids that could walk on hot bitumen roads and lawns full of bindii's? Now it's memory foam shoes and comfy slippers. And I'm happy for the cockies :)

One of the worst things in Aus to tread on with bare feet but the best ammunition for cockie plagues. ;-)

Thanks, António. I appreciate the nomination.