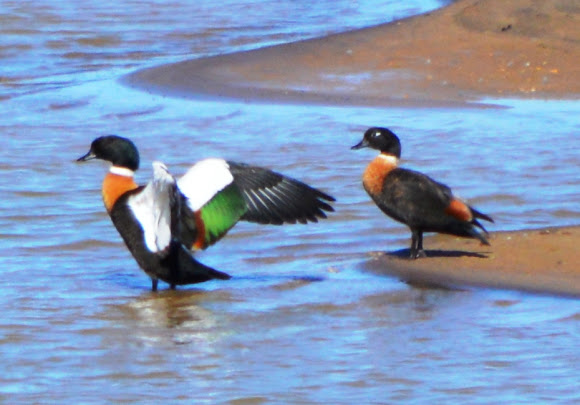 Male (left wings spread) female on right. Also known as Chestnut breasted Shelduck, Mountain Duck, this Australian duck is said to be 'abundant' but it is a rare sight during most of my travels. The colours are brilliant on this quite large bird (adults grow to just over 70cm), dark head, white neck ring and wing patches, bright chestnut neck/breast and on wings, darker body, tail and wing primary feathers, bright green wing patch, females have a white eye patch. The colours also have an iridescence. Call is a loud honking sound. A very wary bird. Colours also less bright when non-breeding. Feeds on grasses, herbs and water weeds.

Found near water sources in southern and western regions of Australia including Tasmania. These ones found at a semi-permanent lake in the middle of gibber stone country.

Not the best photo but it was at the limits of my zoom lens and the birds were very flighty. I was perched on top of a gibber stone cliff top. The ducks were with a mixed flock comprising of Pink-eared Ducks, Blue-billed & Hardhead Ducks and Red-necked Avocets. A beautiful sight especially in the red desert but they were all very flighty and difficult to approach, so to limit disturbance I settled for just knowing they were there and that I was privileged to have seen them.

Thanks Mark & Hema Shah! It really is beautiful in Central Australia, and the colour on these ducks drew your eyes straight to them. Hope to have better photos one day!

love the splash of green!