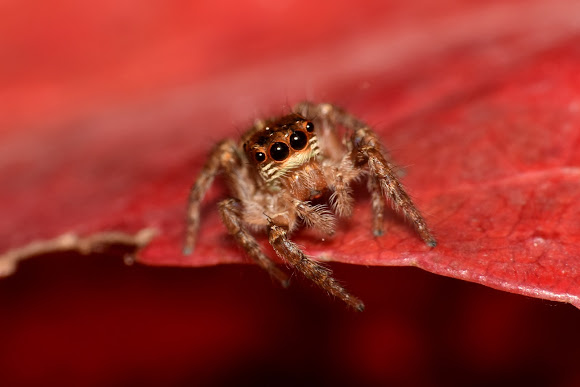 There are more than 500 different genera of jumping spiders family and around 5,000 species. This is approximately 13% of all spider species in the world. They don’t seem to scare easily but the fact that they can jump does tend to scare many people. They aren’t sure of where this Spider is going to land.This is one of the few types of Spiders that does have excellent vision. They have four pairs of large eyes. They have three rows of eyes that help them to see what all is around them. They also have lungs and a tracheal system that are well developed. They function through a process called bimodal breathing. They feature thousands of small hairs that allow them to have traction for climbing up terrain – including glass.

You will find the Jumping Spider moving around during the day. Generally the availability of food resources will determine when they will be active. They do what they can to get the best opportunities. They are very active hunters so they don’t have a web (in most of the species) and then sit around and wait. They track prey for quite a distance and plan a strategy. They will quickly pounce with the element of surprise on their side. Then they are able to quickly bite which injects the venom. They consume a variety of insects, bugs, and they also will consume other species of spiders. They are also know to consume both pollen and nectar.

The eyes of jumping spiders of a decidedly odd arrangement. Two smaller eyes bracket two large eyes that rest in the center of their rectangular heads. Those two main eyes are what function like telescopes. Their eyes are basically just immobile lenses, and a long tube extends down from those eyes. This tube is filled with a liquid of some kind that we don't totally understand, but it causes light to bend, essentially functioning as a second lens. The eyes themselves collect and focus light while this liquid spreads it out. This process allows the spiders to see a massive amount of of detail, despite their tiny size. Additionally, the spiders' retinas can swivel on their own, allowing the spider to look around without moving its head.

Marpissa muscosa is an European species and not found in India. This must be a Carrhotus sp., of which there are 3 species in India: Viduus (which is not), Sannio and Tristis). Unfortunately it is not easy to get down to species level from the information we have.