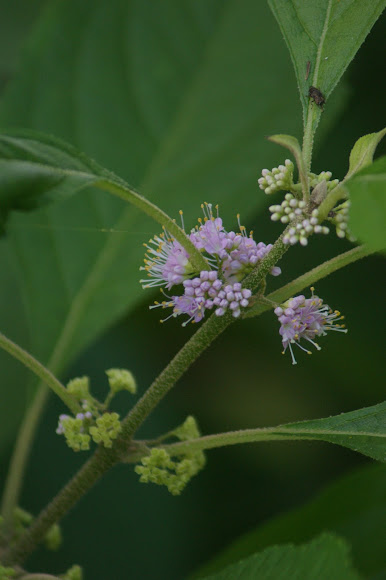 American beauty-berry most often grows 3-5 ft. tall and usually just as wide, It can reach 9 ft. in height in favorable soil and moisture conditions. It has long, arching branches and yellow-green fall foliage, but its most striking feature is the clusters of glossy, iridescent-purple fruit (sometimes white) which hug the branches at leaf axils in the fall and winter. Bark light brown on the older wood, reddish brown on younger wood. Bark smooth, with elongate, raised corky areas (lenticels); twigs round to 4 sided, covered with branched hairs visible under a l0x hand lens. Leaves in pairs or in threes, blades half as wide as long and up to 9 inches long, ovate to elliptic, pointed or blunt at the tip and tapered to the base; margins coarsely toothed except toward the base and near the tip, teeth pointed or rounded; lower surface of young leaves covered with branched hairs. Flowers small, pink, in dense clusters at the bases of the leaves, clusters usually not exceeding the leaf petioles. Fruit distinctly colored, rose pink or lavender pink, berrylike, about 1/4 inch long and 3/16 inch wide, in showy clusters, persisting after the leaves have fallen. The seeds and berries are important foods for many species of birds, particularly the Northern Bobwhite. Foliage is a favorite of White-tailed Deer.

This one was photographed at the Visitor's Center at the Silver Bluff Audubon Center near Jackson, SC. It was growing at the edge of a mixed pine-hardwood forest.