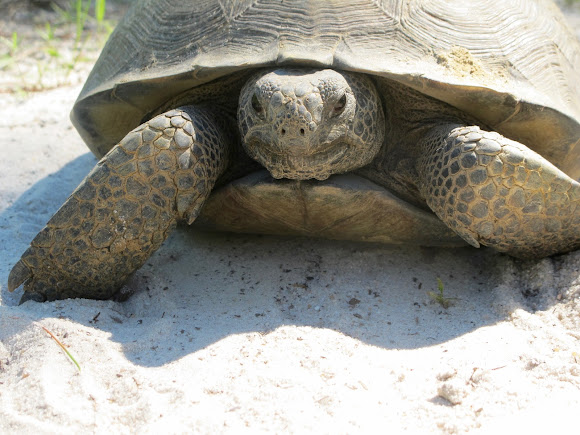 A large terrestrial tortoise native to the southeastern United States. The majority of tortoises are found from the fall line of Georgia to southern Florida as well as west to southern Alabama and Louisiana. This was is an adult male. Males have glands on the bottom of their chin to attract females as well as a gular scute on their plastron that can be used to flip other male tortoises. This one was walking along a road at Broxton Rocks WMA

The tortoise makes large burrows in the ground by digging into sandy substrates with its front legs. Burrows can be over 2 m deep and extend well over 2.5 m in length, though many are smaller than these extremes. These burrows are used by over 250 species and are especially important during fires. For this reason the tortoise is often considered a "keystone species" or an "ecosystem engineer"