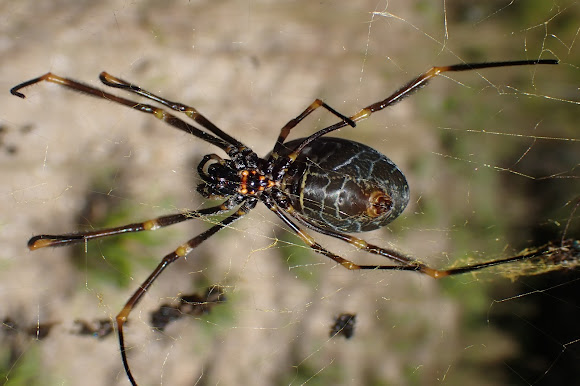 A large and leggy spider with a pale grey abdomen and distinctively banded legs. The female is much larger than the male. They form webs that span up to six metres and contain a main structural bridge which is very thick, strong and a beautiful gold colour.
This girl was about 100mm leg span.

Found in a very sandy area near a lake nature reserve, her web stretched about five metres between a small eucalyptus, the ground, and some distant shrubs about 2 metres tall

A much smaller male can be seen hiding behind her in pic 2.
There are two species in the Sydney area - E.plumipes and E.edulis.
In some parts of the world the abdomen is regarded as a delicacy when roasted and seasoned.
The golden silk is the inspiration for Kevlar and in Madagascar it was collected from over a million and a half webs then transformed into a single, golden embossed cape which is now on display in London. It has to be seen to be believed. https://upload.wikimedia.org/wikipedia/c...