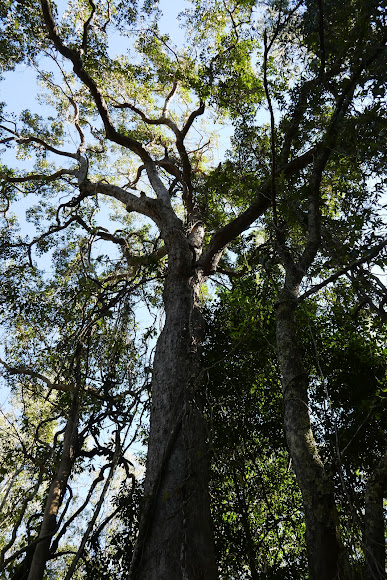 Pink Bloodwood is one of a number of bloodwood species native to Queensland and New South Wales, and is common in Brisbane and surrounding areas. I'm drawn to the bloodwoods because they have unusual and very distinctive grey bark which is rough, flaky, and irregularly tesselated. They are so named from the red sap exuded when they are cut. This species is a medium to tall tree which can reach 20–30 m (65–100 ft) in height with a 10–20 m (30–65 ft) spread. It's a very hardy tree. This spotting was very large, and was one of half a dozen bloodwoods clustered together in a small area. They were covered with large lianas (particularly first and last photos).

Spotted in a pocket of sub-tropical rainforest at Lake Manchester, a freshwater reservoir west of Brisbane. It is located in Brisbane Forest Park, an area of dense native bushland. Area well-shaded and generally quite moist. This species' natural range is on a narrow belt ranging from Cooktown to north of Newcastle. It grows in open forest, or occasionally lone trees grow in closed forest or on the margins of rainforests. That's the case with this spotting.