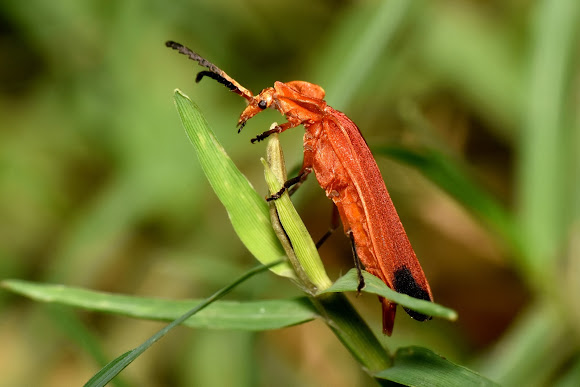 Net-winged beetle, (family Lycidae), any of some 2,800 species of soft-bodied, brightly coloured, predominately tropical beetles (insect order Coleoptera) whose wing covers, or elytra, are broader at the tip than at the base and are characterized by a raised network of lines, or veins. The adults feed either on plant juices or on other insects and can easily be seen as they fly slowly between plants or crawl on flowers. The bold colouring of orange and black or blue probably warns predators of their acidic, burning taste. Larvae feed on wet rotting wood and are often found in high numbers.

Habitat for many groups, typically woodlands, Many are unpalatable to predators due to ingesting toxic chemicals. They present aposematic colors that advertise their toxicity.(Chemoecology. Defensive Chemistry of Lycid Beetles and of Mimetic Cerambycid Beetles that Feed on Them).

Interestingly, the net-wing beetles are attacked by another type of beetle, a cerambycid that mimics the color of the net-winged beetle. The cerambycids can consume the net winged beetles toxins and process them safely. The cerambycids sequester the net-winged beetle toxins and use them for their own protection. The pair of net-winged beetles in the photo were busy mating. Note that the male is much smaller than the female. Mature insect eggs are relatively large compared to body size of insects, so the female must be large enough to accommodate them. The male can be smaller because sperm are much smaller than eggs. I don’t know of any correlation between mating system and size disparity. Insects have evolved many interesting characters. However, if male territoriality is important, there can be sexual selection for larger males that are more capable of taking and defending territory from other males.

ID wrong - this is a Net-winged beetle, Lycus sp.
(note the beak.like head)

Hello Shiva and Welcome to the Project Noah community!
We hope you like the website as much as we do. There are many aspects to the site and community. The best way to get started is to read the FAQs at http://www.projectnoah.org/faq where you can find all the tips, advice and "rules" of Project Noah. You, like the rest of the community, will be able to suggest IDs for species that you know (but that have not been identified), and make useful or encouraging comments on other users' spottings (and they on yours).
There are also "missions" you can join and add spottings to. See http://www.projectnoah.org/missions . A mission you should join is the http://www.projectnoah.org/missions/2165... to chose the best wild photo of 2018,only the spottings added to that mission are eligible.Note that most missions are "local". Be sure not to add a spotting to a mission that was outside of mission boundaries or theme :) Each mission has a map you may consult showing its range. We also maintain a blog archive http://blog.projectnoah.org/ where we have posted previous articles from specialists from different geographical areas and categories of spottings, as well as wildlife "adventures".
So enjoy yourself, share, communicate, learn. See you around :)