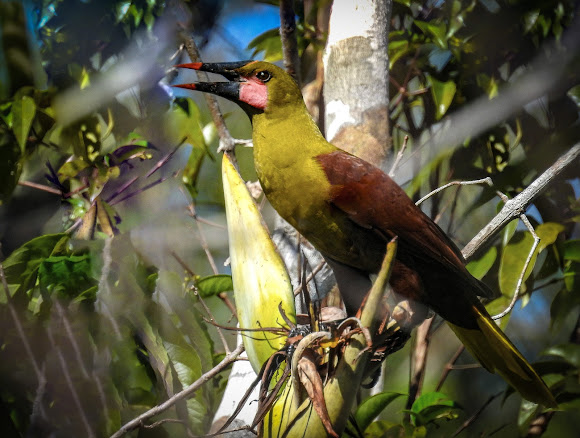 The olive oropendola (Psarocolius bifasciatus) is the largest member of the icterid family and rivals the Amazonian umbrellabird as the largest passerine bird in South America. It is sometimes placed in the genus Gymnostinops instead of Psarocolius. As suggested by its name, it is found widely – but often in low densities – throughout humid lowland forests of the Amazon Basin, with the notable exception of most of the Guiana Shield. It is sometimes split into two species, the western olive oropendola (P. yuracares) and the eastern Pará oropendola (P. bifasciatus), but the subspecies P. y. neivae is widely recognized as a hybrid swarm, and the vast majority of authorities consider them a single species.

The sexes of this icterid are very different in size: the male is 52 cm (21 in) long and weighs 550 g (1.2 lbs); the smaller female is 41 cm (16 in) long and weighs 260 g (9.2 oz). Confusingly, the name "olive oropendola" is usually used for this combined species, despite the fact that the nominate subspecies has no olive to its plumage, as its head and chest are black (these are olive in P. b. yuracares). The back, wings and belly of this large oropendola are brown, the outer rectrices are yellow (i.e. tail appears all yellow from below), the bare facial skin is pink, the eyes are brown, and the bill is black with an orange tip. The superficially similar green oropendola has an olive back and wing-coverts, lacks extensive bare facial-skin, has a pale bill with an orange tip, and blue eyes.