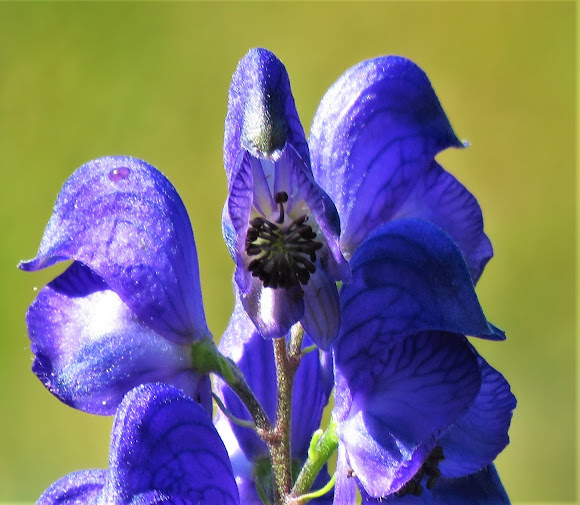 This is a very tall herbaceous and imposing plant, growing up to 150 cm or more. Its stem is topped by racemes of large strikingly blue and unmistakable flowers. One of the five sepals forms a characteristic "helmet" or "hood" like structure. The leaves are dark green, and palmately lobed with five to seven segments; each segment is trilobed with coarse sharp teeth. The Monkshood is also known as aconite (as many other species in this gender), leopard's bane and many other names; and are often confused with Wolfsbane, whose flowers are yellow.

Here, like every summer, I see these beautiful but dangerous plants growing in peatbogs of Lamoura lake valley. Lamoura lake is the highest altitude glacial lake in Jura Mountain range, at 1156m. The valley is surrounded by a coniferous forest, and the majority of it is occupied by grassland, while some of the lake shores are peat-bogs. The site of Lamoura Lake has been designated as a Natura 2000 area, in order to protect this fragile peatbog ecosystem.

Many species from Aconite genus are potently poisonous, and contain several poisonous compounds, all highly toxic. Literature has it that extracts of Aconites were used on spears and arrows for hunting and battle; but also that it was used as poison to eliminate enemies throughout history. And important notice (even though the sources do not agree on this point) : it was reported that one of toxic components, the aconitine, can be absorbed through the skin so that poisoning may also occur following picking the leaves without wearing gloves... In mammals, aconitine affects excitable tissues such as cardiac and skeletal muscles and neurons.