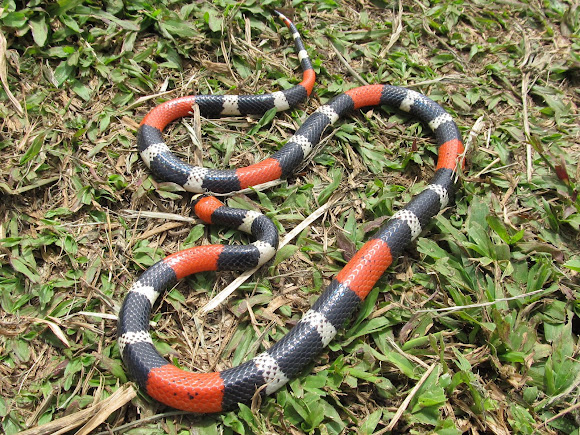 Also called the South American Coral Snake/Corales acintadas amazónicas (Amazonian ribbon coral), this is a brightly marked, tricolored coral snake with colors arranged in triads (red, black, white, black, white black, red). It is one of the longest coral snakes, the largest on record (116 cm) being from 11 examples from Peru. One was reported at 145 cm from Ecuador. Out of 64 coral snakes I’ve handled the largest measured 124 cm, 138 cm and 164 cm. That is very large for a coral snake. This Coral can easily be distinguished from other corals by the white ring very near the tip of the nose and a black ring over the eyes (photo #3).

This Coral snake was found on a trail to a pasture in the Amazon rainforest of SE Ecuador (900 masl).

I like to mention with my coral snake posts that the rhyme people know to tell if a snake is a real coral or a false coral, “Red on yellow, kill a fellow, red on black, friend of Jack” only works in the united states. Of the 6 species of Coral snake in our area, 4 fo the six are “red on black”, one is nearly solid black and the other speckled.

Thanks Jay. Corals are special.

Hi Sukanya. In the grass, yes, it is easy to spot. But you would be surprised how hard it is to spot one of these in the leaf litter on the floor of the jungle. Beautiful critters, though. Thanks.

I bet you can spot this one from a mile away...spectacular colours.