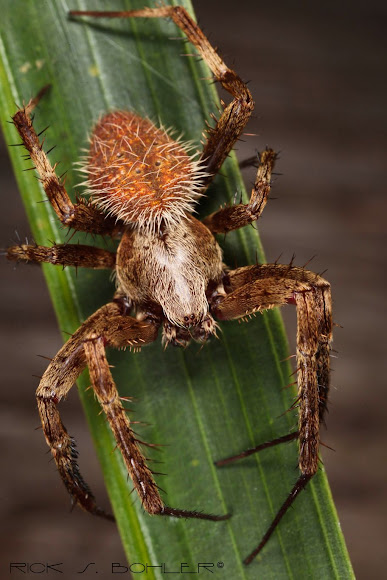 Common and conspicuous members of the moist woodland communities in much of Florida. These spiders are beneficial, consuming a variety of insects. Although typically nocturnal throughout most of their life spans, adult females can be found sitting head down in the hubs of their webs during daylight hours of the fall season. Bites from these spiders are not known to cause serious effects to humans.

Common in moist woodland habitats than in drier woods, and seem to prefer those habitats dominated by hardwoods. Juvenile stages usually begin making vertical orbwebs about dusk and take the orbs down shortly after dawn (Kaston 1976). During the day, each spider stays in a retreat made of leaves curled together and tied with silk, located at the attachment of an upper frame thread; frame threads are sometimes left in place. Adult females often leave their webs up and hunt during the day. This may be due to their need for additional food for developing eggs along with a decrease of nocturnal prey in the cooler fall nights.

Close-up view of the "face" of a male orb weaver spider showing multiple eyes and two pedipalps. The male deposits a drop of sperm on a special web, then sucks it into the pedipalps. In mating, the sperm is transferred by inserting a pedipalp into an opening on the underside of the female's abdomen.