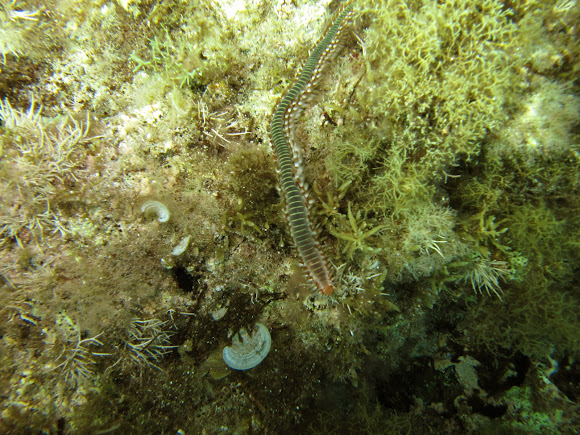 Bearded fireworms are usually between 5–10 centimetres (1.9–3.9 in) in length, but can reach up to 35 centimetres (13.8 in). They have a group of venomous white bristles on each side, which are flared out when the worm is disturbed.

Bearded fireworms are usually found on reefs, under stones in rocky areas of the sea, and on some mud bottoms. They live throughout the tropical western Atlantic and at Ascension Island in the mid-Atlantic. They can be found near ocean reefs and at depths of up to 150m. They are very common in Caribbean reef systems across the Antilles, where they are often spotted by divers at a wide range of depths. They are also common in the Mediterranean Sea in the coastal waters surrounding Cyprus and the Maltese archipelago.

Very nice photo. If you know the species, can you give me your opinion on the one here?
http://www.projectnoah.org/spottings/140...
I think it is Hermodice carunculata but the current was moving me and my photos are not so net as yours.