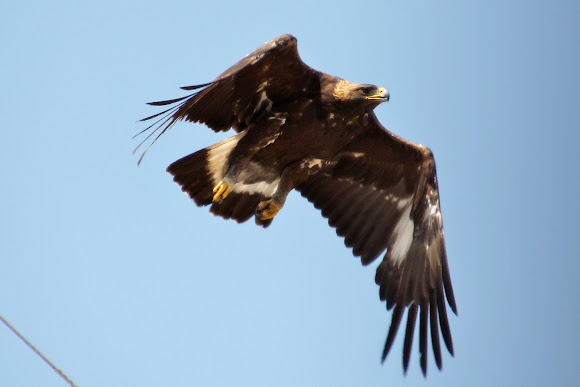 Golden Eagles are one of the largest birds in North America. The wings are broad like a Red-tailed Hawk's, but longer. At distance, the head is relatively small and the tail is long, projecting farther behind than the head sticks out in front. Adult Golden Eagles are dark brown with a golden sheen on the back of the head and neck. For their first several years of life, young birds have neatly defined white patches at the base of the tail and in the wings.

We had just seen a peregrine falcon which darted off into the sky before we could even register what it was. We were ecstatic as we drove down a near by dirt road and saw a large dark bird sitting on top of a telephone pole. At first we thought it was a turkey vulture, then we thought it was a dark morph red-tailed hawk....THEN we realized it was a Golden Eagle! This is the second time we have seen a Golden on the plains of Colorado. I always find them out of place out east, as I have always seen them as mountain or cliff dwellers. Any day a Golden Eagle graces your path is a good day in my mind! The poor young bird eventually took flight thanks to a very unhappy Red-tailed hawk that had been relentlessly attacking!

Thank you Desmond and Dixie!

Thanks Joshua! One of my favorite spottings!

Thank you Christy! Thank you Ashley, any time you want to come out and go birding in CO, just say the word! I will just make you return the favor in your neck of the woods! ;)

Beautiful photos, Emily! This is still something that has managed to evade me yet they aren't hard to find... If I still manage to miss one this winter I may have to come up for a visit!

Oh, your Golden looks fantastic!! I haven't started on my pics! I've looked, but that's it. Nice shots, Em!

That's how I felt mpvettch!