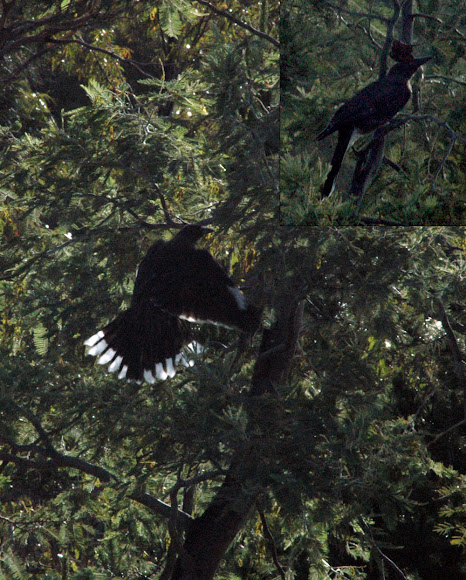 This Tasmanian subspecies of the Gray currawong is the darkest, with a black body that makes it nearly indistinguishable from the endemic Tasmanian Black currawong. The clearest difference is that the Gray currawong has white feathers around its vent (under-tail), as shown in the inset (upper right).

We have both Gray currowong and Black currowong in our valley. As both species tend to fly low, either just above or even slightly below the tree-tops, it’s rare to get a clear sighting of these large black birds. Distinguishing between the two species is especially difficult since both have white tips on their tails and white in their wings. Fortunately their calls are distinctly different. The Grey has a clinking call that gives it its local name. Similarly, the Black has a three syllable call that sounds a lot like “curr-a-wong”.