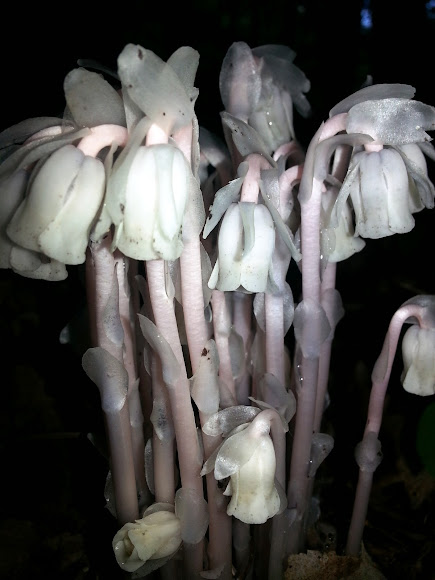 Indian Pipe, also known as “Corpse Plant,” is one of the easiest plants to recognize. Unlike most plants, Indian Pipe doesn’t have chlorophyll, the stuff that makes plants green. Indian Pipe is a waxy, whitish color. It turns black when it gets old or if you pick it. Indian Pipe is only four to ten inches tall. It has flowers that droop and tiny, scale-like leaves. When they look at it, most people think Indian Pipe is a fungus or a mushroom.

Indian Pipe is usually seen from June to September. It grows in shady woods with rich soil and decaying plant matter. This plant is often found near dead stumps.

This is the first time I have ever found these growing in our woods! Some people call them Ghost Plants. The stems are pinkish and the flowers, that look like droopy tulips are white or bluish. They smell amazing! They grow in clusters.

When I used to live in Michigan, I loved seeing these plants throughout the woods. I would commonly see these in clusters similar to this photo. Since moving to Minnesota, I have yet to see one. This is a fascinating plant, as it parasitizes mycorrhizal fungus and takes nutrients from the fungus and indirectly from the trees.

Welcome to Project Noah! This is a really nice spotting.
I see these in the woods around here too, but rarely in such a large cluster as you have in this spotting!

If you haven't done so already, please take a few minutes to read through the FAQ page: http://www.projectnoah.org/faq

I hope you enjoy it here as much as I do!

Just so you are aware, with the scientific name, only the first part is capitalized. The second part should be lower case.