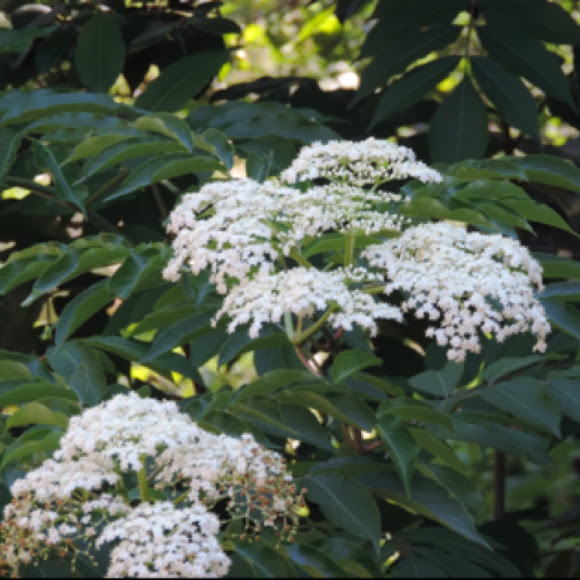 Black elder is a loose, graceful, deciduous shrub with both woody and herbaceous branches to 12 ft. Many long stems arise from the base, arching at the top. Broad, white pith in stems and branches. Pinnately-compound leaves up to 12 inches long, opposite, consisting of a central axis with 4 to 10 usually 4 to 6, paired leaflets and a terminal one often larger. Leaflets ovate to elliptic or narrower, up to 7 inches long, with an extended tip and a broadly wedge shaped base, margins toothed except at the tip and toward the base, the teeth narrow and pointed toward the tip. Flowers white, 3/16 to 1/4 inch across, in broad, flat, conspicuous clusters up to 10 inches or more in diameter, appearing from May to July. Fruit berrylike, dark purple when ripe, 3/16 to 1/4 inch wide, edible.

Elderflowers and the juice and flesh of ripe common elderberries are edible. Uncooked berries produce a dark purple juice and are astringent and inedible, but when processed impart a sweet, earthy flavor. The stems, leaves and unripe berries contain unsafe levels of cyanic glucosides. Elderberries of all varieties should be cooked before eating. Elderberries and elder blossoms have a long history of multiple uses and not just in North America. Humans apparently recognized elderberry as a useful plant even in prehistoric times: Evidence of its cultivation is found in Stone Age village sites in Italy and Switzerland. As a medicinal plant, the use of elderberry stretches back into European history, where gypsies reportedly called it “the healingest tree on earth.” Hippocrates listed it among the prominent plants of his Materia Medica, and other ancient writers mentioned it for treating many diseases. Native Americans used elderberries to treat rheumatism, sciatica, coughs and other conditions. In England, the popular hedge plant was once known as “nature’s medicine chest.” Early settlers apparently brought the habit of cultivating elder bushes to this continent.