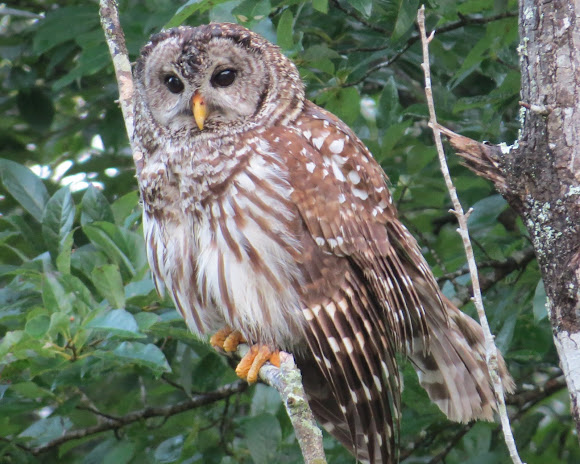 Size & Shape Barred Owls are large, stocky owls with rounded heads, no ear tufts, and medium length, rounded tails. Color Pattern Barred Owls are mottled brown and white overall, with dark brown, almost black, eyes. The underparts are mostly marked with vertical brown bars on a white background, while the upper breast is crossed with horizontal brown bars. The wings and tail are barred brown and white. Behavior Barred Owls roost quietly in forest trees during the day, though they can occasionally be heard calling in daylight hours. At night they hunt small animals, especially rodents, and give an instantly recognizable “Who cooks for you?” call.

Habitat Barred Owls live in large, mature forests made up of both deciduous trees and evergreens, often near water. They nest in tree cavities. In the Northwest, Barred Owls have moved into old-growth coniferous forest, where they compete with the threatened Spotted Owl.

Owl was waiting for frogs and one Northern Mockingbird began to screech loudly. The Mockingbird began a flyback batting of the owls' head. The owl would duck and bat his wing at the Mockingbird. The Mocking bird only stopped his assault when the Owl flew to another branch. Description & Habitat information from: http://www.allaboutbirds.org/guide/barre...

Welcome to Project Noah, hebertry870,
I hope you like the site as much we do; there are many features you can explore:
I invite you to go to http://www.projectnoah.org/faq where you will find the purpose and “rules” of Project Noah.
There is a blog http://blog.projectnoah.org/ where we post articles from spotters with special insight into different organisms.
There are also the chats for help with identification, and to comment on your own and others’ spottings.
Look at the global and local missions to put your spottings into:http://www.projectnoah.org/missions
Enjoy yourself here, see you around!