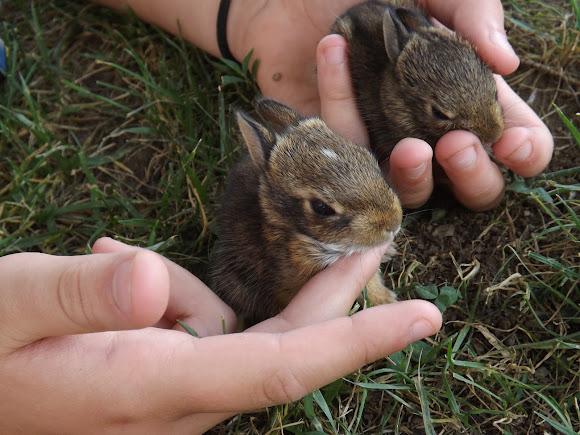 there's a long story about these guys. i found them at my family reunion in a little playground area. Kids had already touch them and sprinkled pine needles on them. My dad let me take two home. I kept them in my shed and fed them kittens milk. Everything went well for about four days. then on the fourth day Peter, one of the bunnies, started acting strange. after about an hour of him breathing very softly, he died. Then the next day the other bunny, Diamond, went missing. Later the next day we found her, dead at the corner of the shed with her eyes out. I'm guessing a hawk got to her. Anyway, i buried them both. It was hard to leave them. :(

I am sorry to hear about these two babies. It sounds like you gave it a good try.

Wild rabbits are very delicate and difficult to raise, even for experienced wildlife rehabilitators. In the future, if you find injured wildlife, try calling your local wildlife rescue or rehabilitators. They have the training and experience as well as access to equipment and wildlife veterinarians to help give these guys the best chance for survival.

It is also a good idea to check your local laws regarding wildlife. In many places, you must have a special permit to keep and handle native wildlife.

Here is some useful information on wild rabbits.

Cottontail rabbits are prey animals so they follow some different rules with their babies. Mom cottontails only visit the nest twice a day and only for a few minutes. When they are not feeding the babies, they stay away from the nest to avoid attracting the attention of predators. If people are around, the mom rabbit will not go near the nest, so it is best to leave the area alone.

If the babies are handled, the mom rabbit will not abandon them, the babies should be returned to the nest and covered back up, or returned to the location where they were found (or as close as safely possible). The best chance of survival that baby rabbits have is to have the mother care for them.

Wild cottontails are weaned and on their own around 3-4 weeks of age. They are small, but do not need human intervention at that point (they are usually around the size of a tennis ball at this point).

Here are a couple of links that may be helpful:
http://wildlife.rescueshelter.com/Pennsy...
http://pawr.com/
http://www.wildrescuetexas.org/wildrabbi... (though it is from a Texas rescue, it is excellent and accurate information, the same applies for wild rabbits in PA)

I hope this helps!

now there's a good discussion topic; do animals go to heaven?
Obviously we have one vote for yes...

thanks so much for the kind comments Christy Chow and ChicaMc!

I'm sorry for your loss, but how wonderful of you to take them in your loving care. Wherever they are, be it heaven or another dimension, they're hopping around together in happiness! Their lives were made better because of you.

SO ADORABLE... I just want to cuddle them!

I once found a baby rabbit as a kid and gave to a neighbor, I think she had the rabbit for a long time became a pet, sorry about your two bunnies :(