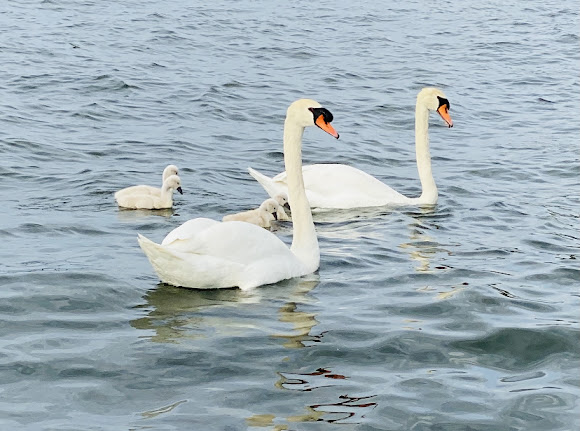 Mute Swans are entirely white with a bill that is orange with a black base. Young swans (cygnets) may be dusky brown-gray all over, with a gray-black bill. Mute Swans spend most of their time floating on the water. They feed by grazing on underwater vegetation in shallow water, tipping up their bodies if necessary.

These birds were spotted on Geist Reservoir in Indianapolis, Indiana.

Mute swans play an important role in the facilitation of the flow of nutrients and oxygen though the ecosystem. Unfortunately, these organisms are considered invasive species. They degrade important vegetation needed for other organisms to survive, and they tend to be more hostile than other bird species. While it is important to protect native species, it is also important to make sure that the species is not causing harm to the environment they are in. By being considered invasive means these species are not entirely "native," it is still important to protect their population as a whole while making sure they are not causing negative impacts on the environment. Relocation and population restrictions have been placed on this species, which has been effective for the time being.