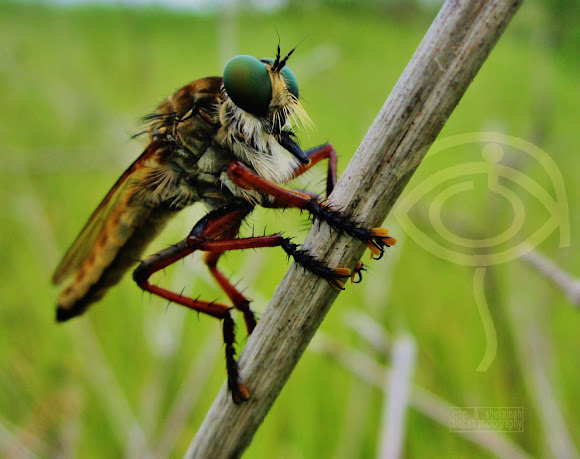 The Asilidae are the robber fly family, also called assassin flies. They are powerfully built, bristly flies with a short, stout proboscis enclosing the sharp, sucking hypopharynx. The name "robber flies" reflects their notoriously aggressive predatory habits; they feed mainly or exclusively on other insects and as a rule they wait in ambush and catch their prey in flight.

Asilidae generally occur in habitats that are open, sunny and dry or even arid. They favour open or scattered vegetation, and some species even frequent bare ground. Typical habitats include savannah, forest steppe, open steppe, semi-desert, maquis shrubland, and related shrubland types such as fynbos and chaparral. Their biodiversity is lower in forested ecosystems and, where Asilidae do occur in such environments, they tend to concentrate in the glades and margins. In those conditions the interrupted canopy leaves space for various species of shrubs and herbaceous plants suited to Asilid styles of predation. In general the biology of the Asilidae still is poorly known. However, various authors have studied their population distribution in particular regions and ecosystems. They have classified the behavioural patterns in terms of microenvironments, ecological, and trophic factors, showing how different species of Asilidae favour particular habitats suited to particular patterns of reproduction and predation. Specific studies show correlations between the floristic composition and predatory behaviour.