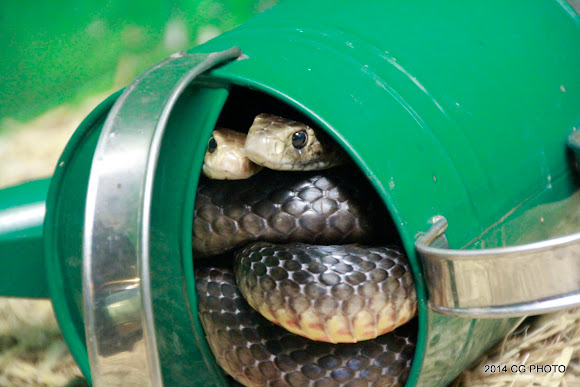 The eastern brown snake is the species responsible for most deaths caused by snakebite in Australia, although, with the advent of efficient first-aid treatment and anti-venom, there are now usually only one or two deaths per year. A large adult brown snake is a formidable creature. They may exceed two meters in length and, on hot days, can move at surprising speed. It has a slender body and is variable in color ranging from uniform tan to grey or dark brown. The belly is cream, yellow or pale orange with darker orange spots.

These snakes are often found in the garden shed, where the chicken food is kept or the mice and rats are.

Although brown snakes are temperamental and dangerous creatures, they will always try and avoid a confrontation with humans if possible. There is certainly no advantage for the snake in attacking something as large as a person so they will only do this as a last resort. Given the opportunity, even brown snakes will flee rather than attack.

Thanks Leanne and James A Mcnair..

@ NathBig.. These are behind glass.. But it is a good warning for all the gardeners here in Australia.. I had them in my potting mix bag and in gum boots before..
@ LarryGraziano Thanks

Great shot! Was this in a Zoo or something or just in a backyard?

So dangerous ! So cute !

Thanks Shanna.. They do look cute and cuddly!! Weird for Brown Snakes.. :)

Christiane, I reckon this is one of the most awesome shots of Eastern Browns that I've ever seen!!!! (They actually do look cute!!!)

Thanks Maria and Karen.. It is a great photo to show Australian visitors where they can hide and to be careful in the garden.

Thanks Emily.. I think there are not many Australians that would use ADORABLE for this snakes.. :)

Too cool, Christiane! They do look like they're cuddled up together :)

Thanks Neil & Mark.. This was not on my property.. but I have found them in my potting mix bag before.
I think they just want to cuddle up in the cold Queensland winter! :)

Amazing shot Christiane. Do you train the snakes on your property?