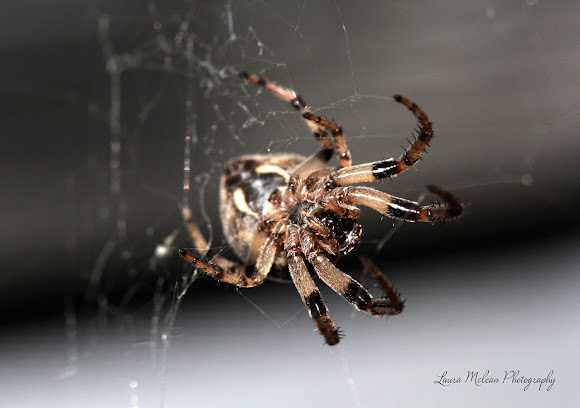 Adult females range in length from 6.5 to 20 millimeters, and the males are 5.5 to 13 millimeters long. The color varies greatly from specimen to specimen. Generally, the smaller and/or younger individuals are darker while the adult females are lighter. The background color is yellow to brown with two longitudinal, wavy or scalloped lines (folium). There are several white or yellow spots within and around the folium. Four elongated spots appear toward the anterior end of the abdomen, creating what appears to be a cross. As with the previous species, the carapace has three dark, longitudinal lines or bands.

The cross orbweaver was probably introduced from Europe, where it has been studied at some length. This is another one of the showy orbweavers and although it may be found in many of the same areas as the other orbweavers, it is commonly encountered next to buildings with exterior lighting—even occurring in lighted stairwells of structures in more rural settings. It is known from Pennsylvania north throughout New England, throughout Canada, and then south into Washington and Oregon.

Photo taken during regular visit to our trailer. This particular spider has a hiding place inside one of the corner moldings outdoors. It was peculiar to see "her" so afraid while smaller ones were active throughout the web.