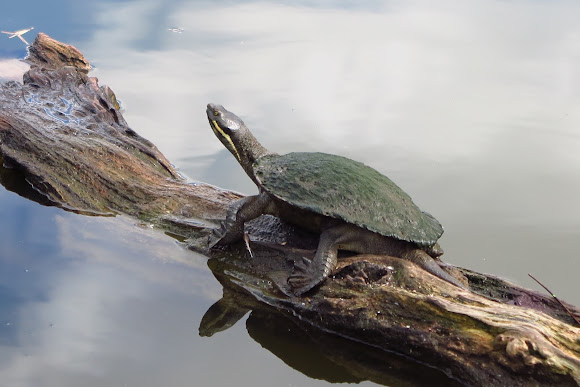 Also known as the Brisbane River Turtle, this is a short-necked turtle subspecies native to the Brisbane region, and a member of the family Chelidae (side-necked turtles). It has an olive to brown carapace which can grow up to 28cm, and a yellow stripe on the sides of its face. It's an omnivorous turtle that feeds on small crustaceans, insects, algae and aquatic plants.

Brisbane rivers, creeks, ponds, lakes and wetlands. Freshwater, still waters including interior drainages. Emydura macquarii is a wide-ranging species that occurs throughout many of the rivers of the eastern half of Australia. This turtle was spotted at the Lone Pine Koala Sanctuary in Brisbane QLD, but despite this being an animal sanctuary, the turtles, just like the blue tongue lizards, water dragons and bearded dragons, are free to roam as they please, including the river.

Re: Scientific name: http://www.reptilesofaustralia.com/turtl... Also have a look at the synonyms at the Wikipedia reference link. There are four subspecies and a number of synonyms for each of these subspecies. Even local sites have conflicting or ambiguous information. Let's make things as complicated as we possible can! Is that good science, or do they just not agree with one another?