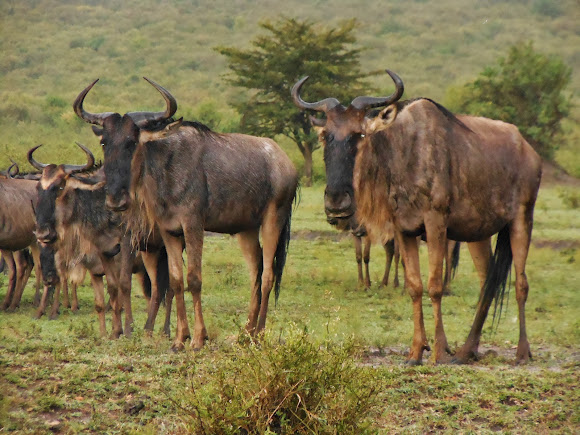 Happened to be in Masai Mara, towards the end of the great migration of the Wildebeest! They stretched across the land for miles! I even saw where they attempted to cross a river (many drown or get taken by crocs), providing food for many different species local to these lands!

They inhabit the plains and open woodlands of Africa, especially the Serengeti National Park, a UNESCO World Heritage Site in Tanzania, Masai Mara Reserve in Kenya, and Liuwa Plain National Park in Zambia.

Each year, wildebeest have a long-distance migration, seemingly timed to coincide with the annual pattern of rainfall and grass growth. The timing of their migrations in both the rainy and dry seasons can vary considerably (by months) from year to year. During these migrations, wildebeest spend ten months per year in the Serengeti National Park and two months in the Masai Mara, (Kenya). Major predators that feed on wildebeest include the lion, hyena, cheetah, leopard, and crocodile, which seem to favour the wildebeest.

Hi Arya,
I have created a Mission for East Africa and cordially invite you to add you serengeti photos to this new mission.
http://www.projectnoah.org/missions/4028...

The Mara crossing is quite a spectacle. Beautiful photos of this extraordinary annual event.

I guess we all have our ways to challenge death to stay (feel more) alive, no matter if we choose that way of living or if it is in our genes, like the wilderbeast.

Beautiful photography and series Arya! You may find this one intersting:
http://www.projectnoah.org/spottings/734...

Thanks Tiz. It is amazing how large their herds are, but I guess that how they (most of them) stay alive!

This is a great and very interesting series! It really makes me want to go to that place! Very inspiering, thank you for sharing this Arya!