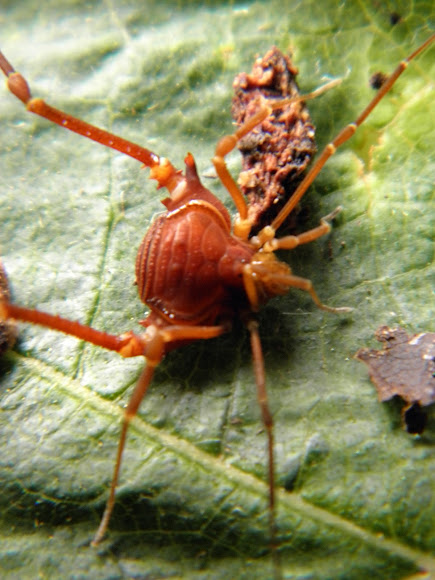 Red harvestman, order Opiliones, fam. Gonyleptidae. They are not spiders. Their habitat is the neotropical area (Central and South America), living in forests, and open spaces (savannah, prairies). Almost all spp are nocturnal hunters, and during daytime remain in dark places, amidst decayed material. Different from spiders, they don't weave webs, have only two eyes, have no poison, but produce a substance with bad odour to repell their enemies.

This species we found it in a rural area near Brasilia, the capital city of Brazil. About one thousand meter a.s.l., called Central Highlands. Semi-open savannah vegetation, named "Cerrado", in our language. Mostly grasses and small trees adapted to 6 months of draught.

Gonyleptidae are the biggest species on order Opiliones. You can easily differentiate females from males observing leg IV and other body features. Until now, science has described around 823 spp on Gonyleptidae, distribuited in 284 genera, They are a kind of special prize for any photographer, since they are beautiful and strange beings to be seen in images.