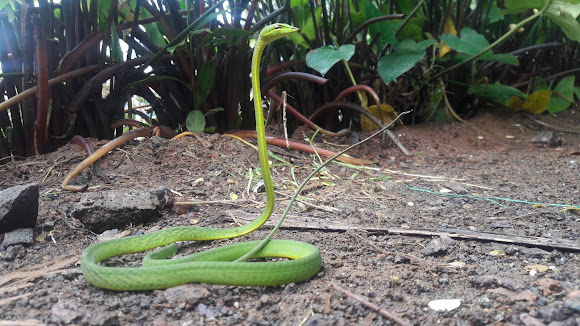 The green vine snake is diurnal and mildly venomous. The reptile normally feeds on frogs and lizards using its binocular vision to hunt. They are slow moving, relying on camouflaging as a vine in foliage. The snake expands its body when disturbed to show a black and white scale marking. Also, they may open their mouth in threat display and point their head in the direction of the perceived threat. There is a widespread myth in parts of southern India that the species uses its pointed head to blind its human victims. The species is viviparous, giving birth to young that grow within the body of the mother, enclosed within the egg membrane. They may be capable of delayed fertilization (parthenogenesis is rare but not unknown in snakes) as a female in the London zoo kept in isolation from August, 1885 gave birth in August, 1888. The venom is mild and causes swelling. Symptoms will subside within three days.

superb picture of this snake.one of the best so far!