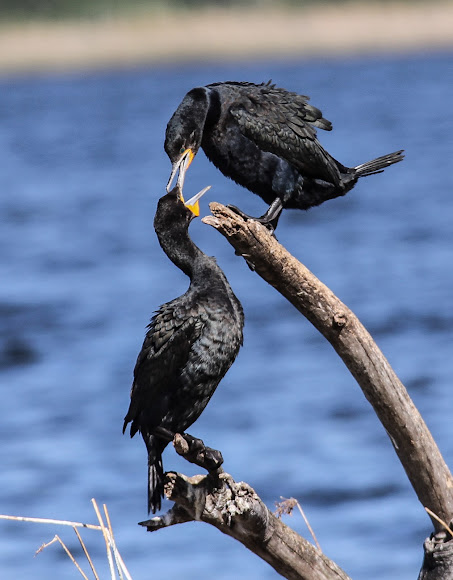 The Cape cormorant is an almost entirely glossy black bird, though in breeding condition it has a purplish tinge and a few white plumes on head, neck, and cloacal areas. Its gular skin is a deep orangey yellow; unusually for a cormorant, its lores are feathered. The bird's wing is about 240–280 mm in extent, and it weighs 800-1,600 grams, with little sexual dimorphism.

the IUCN now classifies it as "Endangered" due to a very rapid decline in the population over the last three generations.

Congratulations Jared ! I hope they find some security and thrive.

Thx very much everyone!

Congratulations! is indeed a lovely moment between these two :-)

Congratulations for your SOTD photo!

Congrats Jared, your wonderful interaction has earned you Spotting of the Day! As recently as 30 years the breeding population of Cape cormorants was estimated to be over 1 million in Namibia alone. Sadly their numbers have declined rapidly and the IUCN now classifies the species as "Endangered".