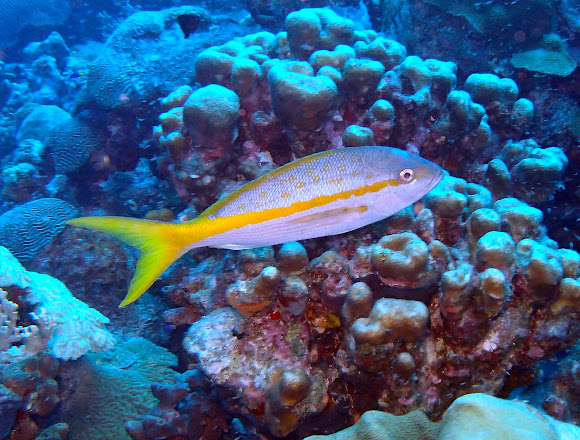 Ocyurus chrysurus is an elongate, slender, snapper that may grow to 76 cm or more in length. The caudal fin is long and deeply forked, with the upper lobe longer then the lower. The mouth is small in comparison with other snappers and is set obliquely, with the lower jaw projecting beyond the upper. The dorsal surface is bluish to olive green in color, fading along the sides to white along the ventral surface. A strong yellow stripe runs mid-laterally along the sides, originating on the snout and broadening as it runs the length of the body to the depth of the entire caudal peduncle. Yellow spots pepper the upper body above the mid-lateral stripe. The caudal fin is entirely yellow. The dorsal fin is yellow distally, but pale at its base and anteriorly. All other fins are pale yellow or clear in color.

Seen in different dive sites; Sharon's Serenity, The Sampler (Klein Bonaire) and also Alicein Wonderland (Bonaire). Yellowtail snappers are typically caught in 30–120 ft of water on and around reefs and other structures. Their normal range is along Florida south to the West Indies and Brazil.