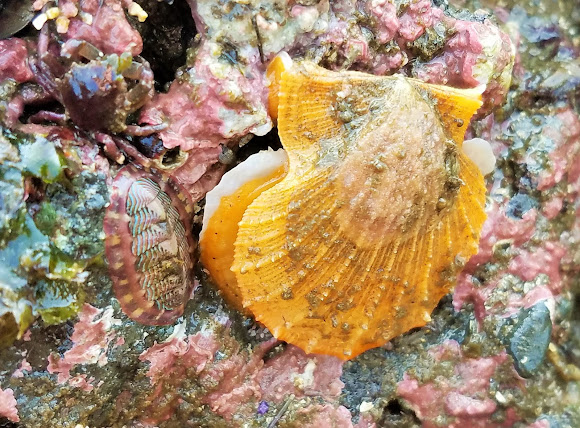 About 2 in. (5 cm) the Spiny scallop has radiating ridges with short spines or teeth. This one had a yellowish orange hue. The shell can be variable in colour (shades of pink, orange or red are common). Chlamys hastata has an amazing symbiotic relationship with encrusting sponge, which you can see growing on it. (Please see notes for the relationship explained by Wikipedia). Next to the scallop is the Lined chiton (Tonicella lineata).

Spotted in a tide pool at low tide at Tongue Point. Found along the west coast of North America from the Gulf of Alaska to San Diego, California.

The spiny scallop usually has a symbiotic relationship with an encrusting sponge which grows on its left valve. This is most often the orange Myxilla incrustans but is sometimes the purple or brown Mycale adhaerens. The sponge provides camouflage for the scallop and may deter predators from attacking it as sponges often produce a repulsive odour and tend to be distasteful. It also makes it more difficult for a starfish to get the strong grip with its tube feet that it needs to force the two valves of the scallop apart. The sponge benefits from the fact that living on the scallop prevents it from being buried in sediment. In the wild it has been found that the scallops and their encrusting sponges both grow to a larger size in areas of high turbidity. A laboratory study showed that, in conditions where the sediment was frequently stirred up, sponges on empty scallop shells all died while those on living shells flourished. However, another study showed that growth rates in scallops heavily encrusted by sponges were significantly lower than in unencumbered ones. Other organisms also grow on the scallop's shell. The boring sponge Cliona celata is a parasitic species which makes holes up to 1.5 millimetres (0.059 in) diameter in the valve. Other common epibionts living on the surface of the valve include tube worms, barnacles and bryozoans. In a survey undertaken off San Juan Islands, Washington, 144 scallops, C. hastata and C. rubida were dredged up, mostly from a depth of 90 metres (300 ft). The right valve was much more heavily colonised than the left with 76% clad with epibionts as against 17% of the left valves. The encrusting sponges (mostly Mycale adhaerens) were common as were the barnacle (Balanus rostratus) and the tube worms Neosabellaria cementarium, Serpula vermicularis and Spirorbis sp. Also encountered were other bivalves, bryozoans, brachiopods and tunicates. Many of the tubes made by the worms were unoccupied and other organisms overgrew living and dead calcareous tubes. On the lower, left valve, cyclostome and cheilostome bryozoans predominated. Starfish seem equally able to force open the valves of a scallop with barnacles on it as one with none. Barnacles are normally sessile animals unable to evade predators. When they are attached to a scallop they benefit from the defence response of the mollusc to threats which enables it to avoid predation. The scallop is disadvantaged because the presence of barnacles may reduce its ability to swim. It has been found that encrusting sponges emit chemicals that discourage barnacle larvae from settling nearby. The larvae preferentially settle on shells that are not encrusted with sponges. This is another way in which encrusting sponges are of advantage to the scallops which are less impeded in their ability to swim by sponges than they are by barnacles. (Wikipedia)